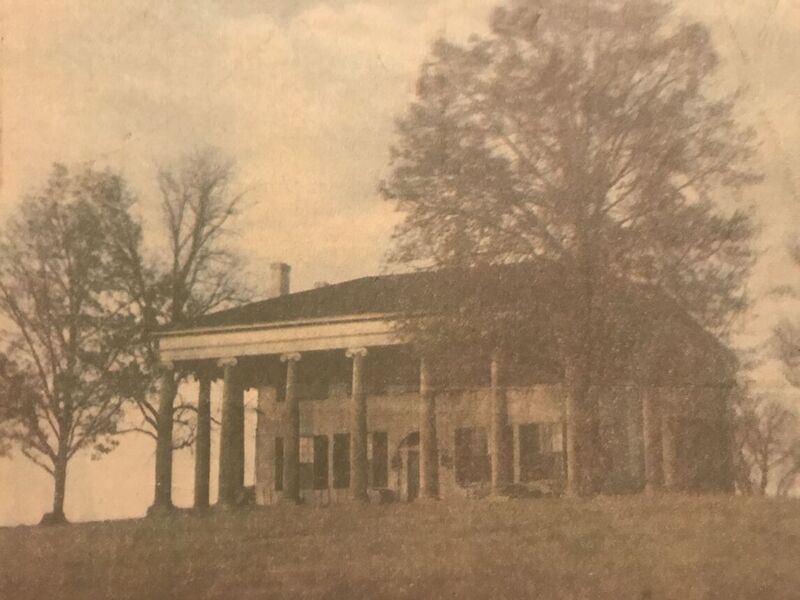 James Jackson, an immigrant from Ballybay, Ireland, moved to Florence, Alabama, in the spring of 1818. Two years later, Jackson hired architect William Nicholson to design the large Greek Revival-style mansion and other outbuildings on the plantation. Construction started in the early 1820s and was completed nearly a decade later in 1830. Jackson named the plantation Forks of Cypress because the Little Cypress Creek and the Big Cypress Creek merged near where the plantation house was built.

James Jackson was renowned for his ability to breed the finest thoroughbred racing horses in the nation. From the time he settled in Florence, Alabama, in 1818 through the early 1830s, Jackson arranged to have more than a dozen English thoroughbred horses shipped to Forks of Cypress. Their offspring were largely sought after by the wealthiest plantation owners and politicians in the nation.

James Jackson died on August 17, 1840, and is buried in the family cemetery near the main plantation house. His widow, Sarah “Sally” Moore Jackson, inherited the property and took over all of the work associated with its upkeep, including the continuation of breeding his prized Kentucky thoroughbreds. During the Civil War, Forks of Cypress was used by Union troops as a base camp for several hundred troops.

The original mansion was struck by lightning and burned to the ground on June 6, 1966. Although the mansion was
completely destroyed, most of the brick pillars remain standing to this day. The brick columns are likely still standing because they were covered in a layer of plaster that contained horse hair, which acted as a fire retardant. Today, the Forks of Cypress is open to the public and the ruins can be toured throughout the year.

There have been accounts of ghostly activity taking place at the Forks of Cypress Plantation House since long before the mansion’s destruction in 1966. According to legend, a reporter who was a guest at the plantation house a few days before it burned had trouble sleeping. He blamed his insomnia on the sounds of gunfire, footsteps, and a scream heard throughout the night. It is possible that the reporter might to have heard the ghosts of the Union soldiers who used the plantation as a base camp. To this day, there have been reports of similar phenomena as what the reporter claimed when he stayed at the mansion.

In regards to the Jackson family graveyard, since the 1930s there has been a ghost story about an apparition of a tall, thin woman walking among the headstones. The Jackson family graveyard is surrounded by a wrought-iron fence
approximately ten feet high, so the possibility of climbing the fence or getting past the locked gate is unlikely. Although not confirmed, most people believe the apparition is that of James Jackson’s wife, Sarah Jackson.

Another graveyard at Forks of Cypress that is said to be haunted is the nearby slave graveyard. This graveyard is not surrounded by a fence, but very few people visit it. Paranormal investigators who have visited the slave graveyard claim to have recorded EVPs of people crying. In addition, an African American spiritual has been heard being sung from within the cemetery.