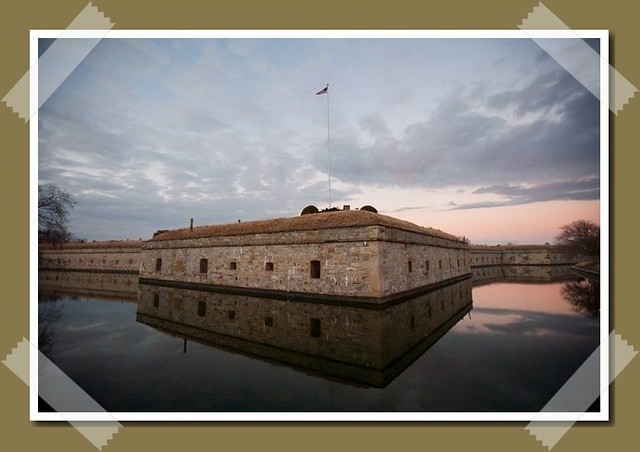 Fort Monroe, an irregular hexagonshaped stone fortress that is completely surrounded by a moat, is located in Hampton, Virginia, on a spit of land called Old Point Comfort. It is the largest fort in the United States and has been continuously occupied since 1823. It is one of only four Southern forts never captured during the Civil War. While they may have been successful at keeping the Confederate army out, they have not been able to stop the ghosts from making the fort their home.

The ghost sightings at the fort read like a who’s who in American history. In a plantation-style house called Old Quarter’s Number One, the spirit of Abraham Lincoln was said to have been seen standing by a fireplace appearing deep in thought. Lincoln visited the fort in May of 1862 to help plan the attack of Norfolk. The ghost of General Ulysses S. Grant has also been spotted in the house. Confederate President Jefferson Davis was imprisoned at the fort from May 25, 1865, until May 13, 1867. Davis’s first year of captivity was spent in a cell in Casemate Number 2.

A vision of a woman is commonly seen staring out of a second-story window in a quarters across from the casemate. It is thought to be the spirit of the Confederate president’s wife, Varina, who fought for better treatment of her husband during his imprisonment. Davis has also made spectral returns to the fort, though not in his cell or at Carroll Hall where he was eventually moved. He is seen walking near the flagpole. But the most well-known hauntings at Fort Monroe don’t involve famous people. One of these specters is known as the Luminous Lady.

According to the legend surrounding this spirit, she was the wife of a much older officer who was insanely jealous and often threw fits of rage. She eventually found comfort in the arms of another man until one night when her husband returned early and found them together. The husband drew his pistol and shot his wife dead. She now walks the alley behind the quarters they once shared. The former Chamberlain Hotel on the base has its own legends of the spirit of a woman who roamed the eighth floor. Her appearances were so common and so disturbing to guests that the floor was eventually closed.

The Chamberlain is currently being renovated into housing for retired military. I have no doubt that we will soon know if this lady still wanders the oncegrand hotel. Numerous other buildings at Fort Monroe also house unexplained phenomena. In the Old Slave Quarters, residents tell of finding furniture moved around and objects mysteriously flying through the air.

Residents of the home where General Robert E. Lee lived during his time at the fort in the 1830s acknowledged that they have experienced hearing mysterious footsteps and voices during their time in the house. I recently spoke to a family who said their young child’s battery-operated toys often turn themselves on and off, even after they remove the batteries.