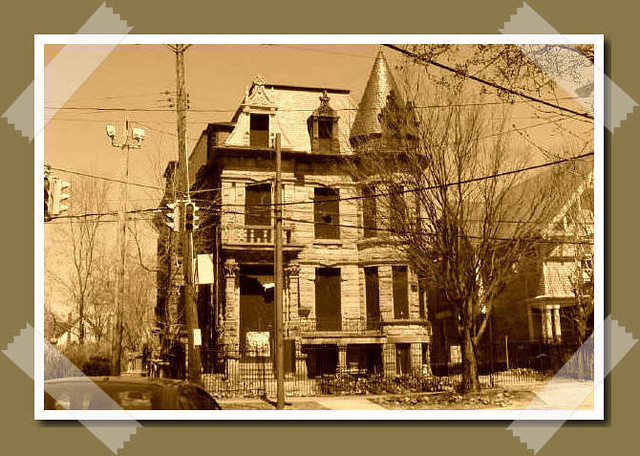 Built in 1865, this Gothic mansion was home to German businessman Hannes Tiedemann and his family. The mysterious deaths of the Tiedemann family mark the beginning of the castle’s ghastly reputation. Strange voices coming from empty rooms and behind the walls, sounds of children crying, faces suddenly materializing in the woodwork, spinning chandeliers, cold spots, and ghostly Ectoplasm — these are but a few of the bizarre occurrences at Franklin Castle, one of Ohio’s most notorious haunted places.

Although unverified, many believed that Tiedemann was abusive toward his family. These rumors intensified following the deaths of his four children, wife, and mother. While their causes of death were officially natural, many quietly suspected that Tiedemann was responsible.

After Tiedemann died, the castle was sold to the German Socialist Party. During this time, not much is known about their activities, although many speculate that the party held secret meetings, built hidden tunnels, and even conducted a mass political assassination. The party later rented out the castle to boarders, one of whom was believed to be a doctor who performed “strange” experiments using human specimens.

Oddly, in the 1970s, one owner found skeletons of a dozen babies inside a sealed room. The coroner examined the remains, but could make no conclusive determination. Another owner, Sam Muscatello, reported discovering a skeleton inside a hidden panel. He later became physically ill and invited a local news crew to investigate. They reported strange events, including spinning chandeliers and equipment that moved on their own accord. A young girl haunts the fourth floor ballroom.

She may be the ghost of a servant who was allegedly murdered, or Tiedemann’s niece. A large blood stain still appears on the marble floor. The Romano family, who owned the home from 1968 to 1976, claimed they were visited by the ghost of a young girl who interacted with the children. The family later moved out of the house after receiving warnings of a future death by the ghost.

One former neighbor reported to me that when he was a child, he and his sisters played with three children in a room at the castle. “The next day, our parents took us to the Castle. We met the owner. He allowed us in and we walked through the door we had entered before. However, this time, there was a closed, locked door at the bottom of the staircase. He unlocked it and opened it to show us.

The steps looked very old, as if they were not used in many years. The owner informed us that no one uses or even goes up there much any more.” Following the fire that nearly destroyed Franklin castle in 1999, it has been closed and undergoing extensive renovations. The new owner, Charles Milsaps, hopes to reopen the castle as a private club. It remains to be seen if the ghosts of Franklin Castle have other intentions.