The Greenbrier Ghost Case was a  West Virginia murder exposed and solved by the Ghost of the victim. The case went to trial, during which testimony concerning the ghost’s appearances was entered into the record. The case is the only known case in the United States in which a ghost’s testimony helped to convict a murderer.

The victim, later known as the “Greenbrier Ghost,” was Elva Zona Heaster Shue, who lived near Greenbrier, West Virginia with her new husband, Trout Shue. Zona (the name she used) probably was born in 1873—records give different dates. She bore an illegitimate child in 1895.

In 1896, she met Erasmus (also given as Edward) Stribbling Trout Shue, an out-of-towner who moved to Greenbrier to work as a blacksmith and start a new life for himself. The two were quickly attracted to each other, and they married shortly after meeting, on October 26, 1896. The marriage was opposed by Zona’s mother, Mary Jane Robinson Heaster, who did not like Shue or the idea of her daughter marrying a stranger.

On January 23, 1897, Zona’s body was discovered inside her house by a black boy, Andy Jones, who had been sent to the house by Shue with instructions to ask Zona if she required anything from the store. Jones found Zona lying on the floor, stretched out straight with feet together, one hand by her side and the other lying across her body, and her head inclined slightly to one side. Jones ran home to tell his mother.

The local physician and coroner, Dr. George W. Knapp, was summoned and arrived at the Shue household in about an hour. By then, Shue had already carried his wife’s body upstairs and dressed it up in her Sunday best: a dress with a high neck and stiff collar secured by a big bow, and a veil covering her face. While Knapp attempted to determine the cause of death, Shue remained planted by his wife’s head, cradling her head and upper body and sobbing in great distress.

Because of Shue’s tremendous display of grief, Knapp made only a cursory examination. He observed slight discolorations on the right side of Zona’s neck and right cheek. When he tried to examine the back of her neck, Shue erupted into such protests that Knapp ended the examination and left. Initially, Knapp announced that Zona had died of “an everlasting faint,” then officially recorded the cause as “childbirth.” It is not known for certain whether Zona was pregnant. For two weeks prior to the tragedy, Knapp had been treating her for an undisclosed “trouble.” In those times, one of the most common causes of death among young women was complications from childbirth, and Knapp may have fallen back on that for lack of anything more specific.

Zona’s body was laid out for her wake. Neighbors who came to pay their respects observed odd behavior in Shue. He changed from overwhelming grief to manic energy to agitation. He did not want anyone near Zona. He had placed a pillow at one side of her head and a wadding of cloth on the other side, explaining that the ministrations were to enable Zona “to rest easier.” He said the big scarf around her neck was her favorite, and that she had wanted to be buried in it. Nonetheless, people noticed that when time came for the corpse to be moved to the cemetery, there was a strange looseness of the head. Tongues wagged.

Heaster, Zona’s mother, took the sheet from inside the coffin, and later attempted to return it to Shue. He refused it. Heaster noticed it had a peculiar smell, so she washed it. The water turned red, but when she scooped the water out of the basin, it was clear. The sheet was stained pink. Heaster tried boiling the sheet and hanging it outdoors in freezing weather for several days, but the stain remained. To her, it was a sign that her daughter had met with foul play.

Heaster prayed that her daughter would come back from the dead and reveal the truth about how she died. specifically, Heaster said later, she wanted Zona to “tell” on Shue, as she suspected the blacksmith of murder.

Heaster’s prayers were answered within weeks. On four nights, Zona’s ghost reportedly appeared and awakened her from sleep, and described in detail her murder. Her husband had been abusive and cruel, she said. He had attacked her in a fit of rage because he thought she had no meat cooked for supper, and had broken her neck. To illustrate, the ghost’s head turned completely around on the neck.

Heaster went to the prosecutor, John Alfred Preston, and demanded an investigation. It is unlikely that he agreed simply on the basis of a ghost’s story. However, the local rumor mill continued to grind about Zona’s mysterious and untimely death, the odd appearance of her corpse and her husband’s strange behavior.

Preston ordered Zona’s body exhumed. Shue vigorously opposed the inquest. He publicly said that he knew he would be arrested, “but they will not be able to prove I did it,” thus indicating at least knowledge that his wife had been murdered.

Zona’s body was exhumed on February 22, 1897. An autopsy revealed a broken neck and a crushed windpipe from strangulation. There was no evidence of violence to other parts of her body. Shue said, “They cannot prove I did it.” He was arrested and charged with murder. He pleaded not guilty.

While he awaited trial in jail, information came out about his unsavory background. He had served time in jail for stealing a horse. He had been married twice before. He had abused his first wife, and had forced her to divorce him by throwing her things out of the house. His second wife had died under mysterious circumstances from a head injury, due, according to different accounts, to a fall or a rock falling upon her.

In jail, Shue remained in good spirits, his grieving long since over. He said that he wanted to have seven wives, and since Zona had been his third and he was only 35, he stood a good chance of realizing his ambition. He said repeatedly that his guilt could not be proved. He wondered why no one suspected the 11-year-old black boy, Jones. (If Shue did indeed commit the murder, he may have set the boy up for possible blame.)

Despite the fact that all the evidence against Shue was circumstantial (it is doubtful the case would have ever been tried in modern times), the trial commenced in late June. Numerous people testified against Shue. Heaster’s ghost story was inadmissible as evidence because it was hearsay. However, the defense raised the matter when she was on the stand, perhaps in an effort to make her appear to the jury to be unbalanced and insane. Heaster recounted the ghost’s assertion that Zona’s neck had been “squeezed off at the first vertebrae” by Shue.

Shue took the stand in his own defense, passionately denying everything said about his alleged guilt. It was to no avail. The jury quickly found him guilty, but voted for life imprisonment instead of death by hanging due to the circumstantial nature of the evidence.

The verdict did not satisfy many in Greenbrier. A lynching party was formed on July 11, but was thwarted due to a tip. Shue was moved to the WEST VIRGINIA PENITENTIARY in Moundsville. He died on March 13, 1900, possibly from an epidemic of infectious diseases that swept the community at that time. There is no record of what happened to his remains.

A highway historical marker near Greenbrier commemorates the case. It reads: 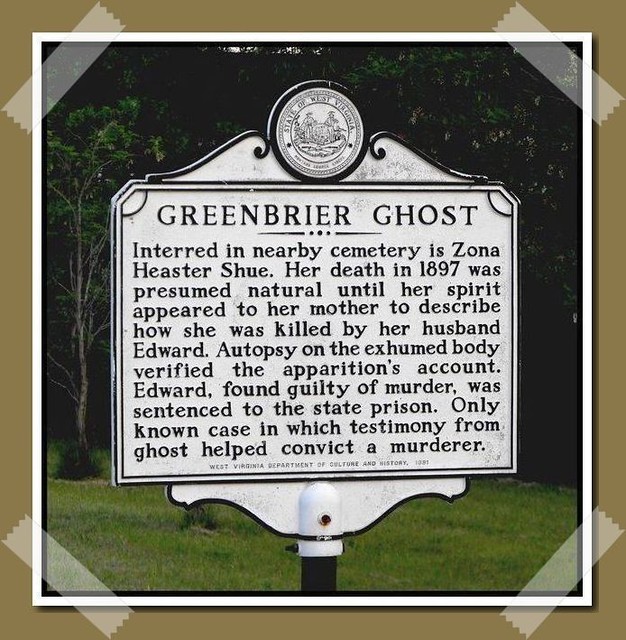 Despite the resolution, many questions remain about the case. In all likelihood, Shue did murder his wife in a fit of rage, and then attempted to cover up the crime. Afterward, there was speculation among the Greenbrier townsfolk that Zona had died a natural death, and her mother had broken her neck in the coffin in an attempt to frame the hated Shue of a crime. There also was talk that Zona had been pregnant with another illegitimate child (accounting for her quick marriage to Shue), and that Knapp had been trying to abort the baby and had killed Zona. Her neck was broken to cover it up. Or, that Shue killed Zona when he discovered her pregnant with a child that couldn’t possibly be his. Though stories circulated of a dead baby being wrapped in the coffin wadding next to Zona’s head, the autopsy mentioned nothing about pregnancy.
Doubts have been raised that Zona’s mother ever saw the ghost. Perhaps Heaster concocted the ghost story to validate her own suspicions and give credence to a request for a postmortem inquest. It does seem odd that the ghost of a young country woman would specifically announce that her neck had been “squeezed off at the first vertebrae” rather than simply broken. Perhaps at trial time Heaster conformed her ghost story to the findings of the autopsy.

In investigating the case, historian Katie Letcher Lyle found an overlooked clue that would indicate that Heaster had made up the ghost story. Zona’s death was announced in the Greenbrier Independent on January 28, 1897. In the same issue, on a nearby page, was a story about how a murder case in Australia had been solved because numerous people had seen the ghost of the murdered man sitting on a rail of a horse pond into which his body had been thrown. Years later, a dying man confessed that he had made up the story of the ghost, which others had then believed to the point that they had claimed to see the APPARITION. The man said he had witnessed the murder, but had been threatened with death if he divulged details. He concocted the ghost in an effort to get the body discovered.

Lyle proposes the plausible theory that Heaster read the story and took a similar course of action to avenge her daughter’s death. It is impossible to say whether she undertook the action deliberately, or was subconsciously influenced by the story and actually believed in Zona’s ghost.

The case of the Greenbrier Ghost features three motifs prominent in folklore concerning ghosts: the inability of a murder victim to rest until the truth is known; the return of the dead for revenge; and the disturbance of a sleeping person by a ghost.