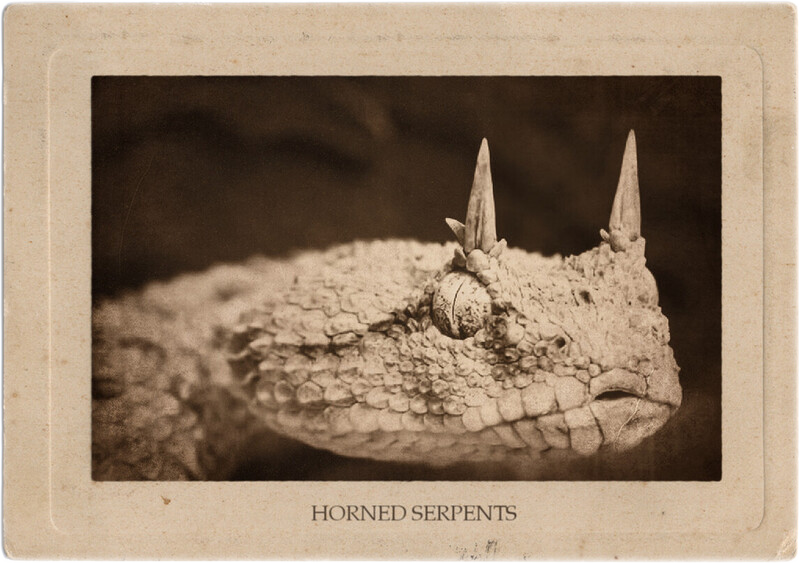 In “Water-Monsters of American Aborigines” (Journal of American Folklore [1889]), Albert S. Gatschet surveyed stories of these peculiar aquatic beasts, including the Great Horned Reptile of the Ohio River region and the Horned Snake. The Creek Indians, when they lived in Tennessee, spoke of a large, horned snake-like animal that frequented water holes. The deep water hole-dwelling Horned Snake was brought to the shore by the magical singing of Creek elders, and when the creature showed its horn, the Indians would cut it off. The horn was then taken as a fetish and carried into war, to ensure success in battle.

An account from the Oneida branch of the Tuscaroras, collected by David Cusick and published in 1828, tells of the “Mosqueto” which rose from Lake Onondaga (near Syracuse, New York) and slew a number of people. The Indians also said that “2,200 years before the time of Columbus” (approximately 700 B.C.), a great horned serpent appeared on Lake Ontario and killed onlookers with its overpowering stench.

The strikingly similar horned beast of Alkali Lake (now known as Walgren Lake) near Hays Springs, Nebraska, was the subject of tales by the local Indians. These native Nebraskans told the first white settlers to the area to be on the lookout for the monsters. The legends seem to have had some truth, for more modern sightings followed. The Omaha World-Herald of July 24, 1923, carried the testimony of J. A. Johnson, who stated: “I saw the monster myself while with two friends last fall. I could name forty other people who have also seen the brute.” Johnson claimed that the stubby alligator-like head had a projection like a horn on it, between the eyes and nostrils. The gray-brown creature devoured livestock, gave off dreadful roars, and smelled horribly. News of Alkali Lake’s horned wonder spread around the world in 1923.

Michel Meurger and Claude Gagnon underscore the importance of these legends in their book Lake Monster Traditions (1988) when they discuss them in their book’s section on Native North Americans. “From Alaska to New Mexico the belief in a horned serpent-shaped water beast of enormous dimensions is widespread,” Meurger and Gagnon write. They go on to place them into a folkloric framework.

If, on the other hand, we speculate about an underlying zoological signal amid the noise of mythology and folklore, where are those “horned serpents” today? As it turns out, they may be surviving in a few of the lakes in the same regions of contemporary North America. If you look at drawings made of the current eyewitness accounts of, for example, Ogopogo, you will immediately notice two bumps on its head. Horns, of course. Several Lake Monsters from around the world, from diverse sites, appear to have horns.

While the long-necked Lake Monsters may fit nicely into a classification system with some dinosaurs or seal-like mammals, a handful of bold theorists have backed another candidate as an explanation for the many reports of more upright, stockier, horned lake cryptids. Could these creatures, they ask, possibly be the crested, duck-billed dinosaurs—the hadrosaurs, a group of prehistoric animals that survived relatively late as dinosaurs go?

Duck-billed dinosaurs also serve as the model for a few Lake Monsters in other locations around the globe. Take, for example, the 1980 descriptions of the Lake Tian Chai monster, a big creature with a long neck topped by a squarish head and, to quote Karl Shuker’s In Search of Prehistoric Survivors: “most memorable of all, a flat duck-like beak (an unusual characteristic recalling to mind the familiar duck-billed dinosaurs or hadrosaurs).” Reports of horned dinosaur-like beasts also have been heard from Africa for years.

The term lake monsters refers to mysterious beasts that are said to live in certain bodies of water. Among the best-known examples of such beasts…

Lake Simcoe, Ontario, is where a monster the locals call Igopogo (it is a play on the popular British Columbia Lake Monster, Ogopogo) supposedly dwells.…

For centuries people have told stories about giant serpents that live in the sea or fly across the sky, the latter of which they typically…

The term Loch Ness monsters refers to mysterious beasts that have been reported dozens of times in a Scottish lake known as Loch Ness, which…