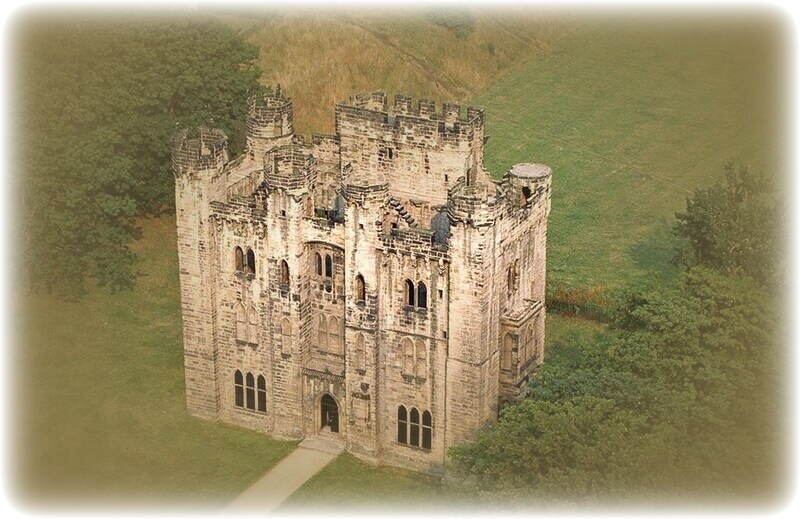 ‘Every castle, tower, or manor-house, has its visionary inhabitants’, says Robert Surtees in 1820, and goes on to tell of perhaps the most famous in the County Palatinate of Durham, the Cauld [Cold] Lad who once inhabited Hylton Castle, a fifteenth-century tower house in the north-west part of Sunderland:

‘The cauld lad of Hilton’ … was seldom seen, but was heard nightly by the servants who slept in the great hall. If the kitchen had been left in perfect order, they heard him amusing himself by breaking the plates and dishes, hurling the pewter in all directions, and throwing every thing into confusion. If, on the contrary, the apartment had been left in disarray (a practice which the servants found it most prudent to adopt), the indefatigable goblin arranged every thing with the greatest precision. This poor esprit folet, whose pranks were at all times perfectly harmless, was at length banished … by the usual expedient of presenting him with a suit of cloaths … At twelve o’clock the sprite glided gently in … and surveyed the garments provided … tried them on, and seemed delighted with his appearance, frisking about for some time … till, on hearing the first cock, he twitched his mantle tight about him, and disappeared with the usual valediction: Here’s a cloke, and here’s a hood, The cauld lad o’ Hilton will do no more good.

Surtees classes the Cauld Lad as a brownie, hence the ‘usual’ in his description – these domestic spirits often inhabited tower houses in the north of England and Scotland. However, he adds that the boy had become identified as the ghost of a servant killed by ‘one of the old chiefs of Hilton’ and thrown into a pond ‘where the skeleton of a boy was (in confirmation of the tale) discovered in the last Baron’s time’.

Surtees thought the story might be founded on fact, as a coroner’s inquest recorded the death of Roger Skelton accidentally killed on 3 July 1609, with the point of a scythe held by Robert Hilton of Hilton. Surtees notes that a free pardon for the manslaughter appears on the Durham episcopal rolls, dated 6 September 1609, but it seems that what the coroner judged accident, local rumour turned into murder, and provided the traditional vengeful ghost.

Surtees observes that the Cauld Lad’s apparent glee on being released from his haunt by the gift of clothes was untypical, as brownies are often sad to leave ‘their’ homes. But the Cauld Lad is by no means a typical brownie. His very name links him to the Cauld Lad of GILSLAND, Cumberland, who was a ghost, and he shares the character of Silky of BLACK HEDDON, Northumberland, halfbogle, half-revenant.

Local storytellers themselves may have seen the Cauld Lad’s reaction as a departure from brownie traditions and sought to redress this. M. A. Richardson, in 1843, gave a corollary of the Cauld Lad’s story mentioned by neither Surtees nor Sir Cuthbert Sharp in his Bishoprick Garland (1834), which explains the spirit’s jubilation. He says, when the inhabitants of Hylton Castle decided to get rid of the Cauld Lad, he got an ‘inkling’ of their intentions, and would often be heard exclaiming sadly at dead of night:

Richardson judged that the Cauld Lad was comforting himself with the (mistaken) thought that the man was not yet born who could ‘lay’ him, but the rhyme links him with ghosts who accost people in hope of being released.

According to Richardson, the Cauld Lad was not banished entirely, but, long after, his voice would be heard at midnight dolefully singing:

‘Here’s a cloak, and here’s a hood,
The cauld lad o’ Hilton will do no more good.’

‘Certain it is’, he writes, ‘that there was a room in the castle long distinguished by the name of the
“cauld lad’s room”, where “unearthly wailings” could be heard.’

William Howitt, when he visited Hylton Castle, heard a different version of the legend. In Visits to Remarkable Places (1842), he writes that a woman there told him that the boy had been kept in confinement in a cupboard and had consequently acquired the epithet ‘the Cold Lad’. She also said that he had no head. Others speculated that his name meant not ‘cold’ but ‘cowed’, having closecropped hair.

Cauld Lad of Hilton A helpful but mischievous spirit, half BROWNIE and half ghost, who once haunted Hilton Castle in Northumbria, England. According to legend,…

Gilsland, on the Northumberland–Cumberland border, is in modern gazetteers assigned to Northumberland, Gilsland Spa to Cumberland. Nineteenth-century authors do not always make this distinction. William…

Silkies are female spirits, dressed in rustling silk, that inhabit the borderlands between England and Scotland. According to lore, silkies perform household chores and are…

Robert Surtees in his History … of Durham (1816–40) writes of Stob-Cross, near Cornforth: And here Stobcross ‘brings on a village tale.’ A few fields…

In a letter to Sir Cuthbert Sharp, the county historian Robert Surtees told him that Christopher, first Lord Barnard, was persuaded by his wife into…