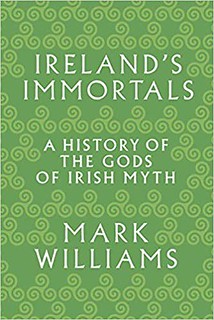 A sweeping history of Ireland’s native gods, from Iron Age cult and medieval saga to the Celtic Revival and contemporary fiction

Ireland’s Immortals tells the story of one of the world’s great mythologies. The first account of the gods of Irish myth to take in the whole sweep of Irish literature in both the nation’s languages, the book describes how Ireland’s pagan divinities were transformed into literary characters in the medieval Christian era―and how they were recast again during the Celtic Revival of the late nineteenth and early twentieth centuries.

A lively narrative of supernatural beings and their fascinating and sometimes bizarre stories, Mark Williams’s comprehensive history traces how these gods―known as the Túatha Dé Danann―have shifted shape across the centuries. We meet the Morrígan, crow goddess of battle; the fire goddess Brigit, who moonlights as a Christian saint; the fairies who inspired J.R.R. Tolkien’s elves; and many others. Ireland’s Immortals illuminates why these mythical beings have loomed so large in the world’s imagination for so long.

An illuminating exploration of Ireland’s ancient dark goddess the beloved phantom queen of the Celtic world with practices for modern-day devotees. The Morrigan is one…

Seanachai (Irish) The word seanachai, pronounced shan-u-kee or shen-u-kee, is Gaelic for “storyteller.” Originally a wandering storyteller who was akin to bards and medieval troubadours,…

Most people have heard of the Celts–the elusive, ancient tribal people who resided in present-day England, Ireland, Scotland and France. Paradoxically characterized as both barbaric…

• Features 16 stores that were translated and transcribed by folklorists in the late 19th and 20th centuries that focus on themes such as Tricksters,…

Irish Witchcraft from an Irish Witch is a delightful mixture of academia and accessibility; a book that explores Witchcraft in Ireland: how it was, is,…