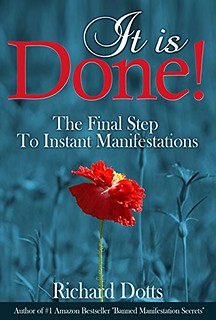 The first time Richard Dotts learnt about the significance of the word “Amen” frequently used in prayers… goosebumps welled up all over his body and everything clicked in place for him. Suddenly, everything he had learnt up to that point about manifestations made complete sense.

What if the word we commonly use to end our prayers today is not merely added as an afterthought, but meant to be a powerful manifestation tool in the first place? What if it is actually the most important part in any prayer? What was going through the minds of those ancient spiritual masters when they said words similar to “amen”? Does that word really hold the final step to fulfilling our desires?

In It Is Done!, bestselling author and spiritual explorer Richard Dotts explores the hidden significance behind these three simple words in the English language. Three words, when strung together and used in the right fashion, holds the keys to amazingly accurate and speedy manifestations.

In his usual candid, illuminating style which has made him a seven time Amazon bestselling author, Dotts devotes the first half of this book to explain his 10-year struggle with the Law of Attraction, and how he struggled to leave behind his habit of incessant worrying and fearful thoughts. “I was constantly worried about things going wrong even when everything was going right. I was afraid that one day, I would run out of money and bad things would happen to me,” writes Dotts candidly in one of the chapters.

Then Dotts quickly moves to show the reader how they can break free from the 4 major blocks that prevent manifestations from occurring in their own lives, and how these blocks are often so pervasive that we do not even realize they are there. Because these “unseen” blocks feel so familiar to us, we often do not recognize that they are standing between us and our greater good.

Get rid of these major blocks, and the manifestations come quickly and effortlessly for you regardless of what manifestation techniques you use.

Learn as Dotts recounts the story of Mark, an old friend whom he has shared these techniques with and whom, within a short span of time managed to achieve incredible financial success in his life. Also learn about the story of other individuals, whose unwillingness to trust in the process led to continued failure and disappointments for them. Dott astutely points out that the difference between these two groups of individuals lies not in manifestation abilities, but in their abilities to work past and get around these 4 major manifestation blocks.

Finally in the second half of this book, Dotts leads readers through the “It is Done!” process in greater detail. Learn how to apply the technique to greatly compound the effectiveness of any manifestation technique you are currently using, be it more conventional techniques such as affirmations, visualizations or even more new-age techniques such as Matrix Energetics, EFT or Quantum Healing. There is no need to change whatever you are currently doing to reap benefits from “It is Done!”

Whatever you are currently doing, the “It is Done!” technique can help you achieve your desires and dissolve any blocks that stand in the way even faster.