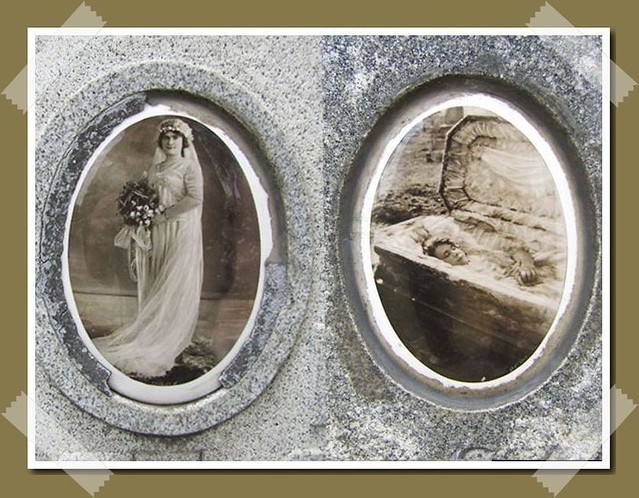 The Italian Bride is a ghost of a young woman whose body was found to be inexplicably undecayed six years after burial. Julia Buccola Petta, known as the Italian Bride, haunts her grave in Mount Carmel Cemetery in Hillside, Illinois, near Chicago.

A native of the west side of Chicago, Julia married young. She died in 1921 at age 29, giving birth to her first child, a stillborn. According to Italian tradition, dying in childbirth is a type of martyrdom, and so Julia was buried in her white wedding dress. Her dead child was placed in her arms and buried with her. She was laid to rest with the Buccola family, not her husband’s, for her mother, Filomena, blamed her husband for her death. Not long after Julia’s burial, Filomena began to experience nightmarish DREAMS in which Julia said she was still alive and needed her mother’s help.

The nightmares persisted for six years, during which Filomena sought to have Julia’s grave reopened. She explained to authorities that she did not know why she needed to have the exhumation done, only that she had to do it. In 1927, Filomena’s request was at last granted.

Julia’s corpse was found to have suffered no decay, but to be incorrupt— like a saint’s corpse—with her flesh as soft as though she were still alive. The skin was fair and not discolored. A photograph was taken of her body inside her opened casket— which showed signs of rotting and decay from having been in the ground. Julia’s family collected enough money to have a monument erected at her grave.

The monument bears two photographs, one of Julia in her gown on her wedding day and one of her incorrupt body in the exhumed casket. Julia’s ghost, clad in her wedding dress, is reported walking through the cemetery’s tombstones at night. If it is raining, she appears dry.

Red Lion Pub reputed to be the most haunted eating and drinking establishment in Chicago. Numerous visitors and patrons have reported a wide range of…

Hull-House A Chicago landmark, now a museum, which in 1913 was widely believed to house a living “Devil Baby.” Hull-House is still included in some…

Phantom nuns are Ghosts allegedly belonging to women of the church, some of whom met violent ends, either as victims of religious persecution or because they were punished for transgressions.