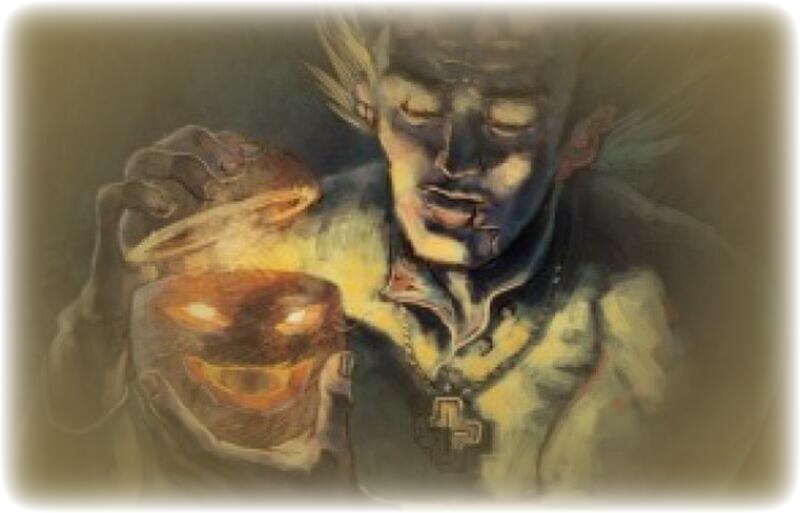 The Jack-o’-lantern (also jacky lantern) is a type of Ignis Fatuus, or “foolish fire.” In British folklore, the jack-o’- lantern is a spectral light that drifts about at night, scaring travellers and beckoning them to follow it until they become lost.

According to lore, the jack-o’-lantern is a soul who has been denied entry into both heaven and hell. It is doomed to wander about the earth clothed in a luminous garment or carrying a lighted wisp of straw.

Different stories explain the origin of the jack-o’-lantern. Best known is the Irish tale of the ne’er-do-well man named Jack, who was notorious for his drunkenness and meanness. On one All Hallow’s Eve (Halloween) night, Jack got so drunk at the local pub that his soul began to slip out of his body. Immediately the Devil appeared to claim his victim. Jack, desperate to avoid his fate, begged the Devil to have one last drink before they departed. The Devil agreed, but told Jack he would have to pay for the drinks, as the Devil carried no money. Jack said he had only sixpence left. He suggested that the Devil, who could assume any shape he wanted, take on the shape of sixpence so that Jack could pay for the drinks. Then the Devil could change back.

The Devil thought this was a reasonable suggestion, and so changed himself into a sixpence piece. Jack snatched up the coin and stuffed it in his wallet, which had a cross-shaped catch. The Devil could not get out, and began cursing.

Jack told the Devil he would release him if the Devil promised to leave him alone for a year. The Devil agreed.

Jack intended to reform his ways for the next year, being nice to his wife and children, paying his bills instead of squandering his money at the pub, going to church and giving to the poor. But soon he had slipped back into his mean ways.

The next All Hallow’s Eve, Jack was hurrying home from the pub when the Devil appeared by his side and demanded to collect his soul. Once again Jack tried to trick the Devil. He pointed to apples hanging from a tree and suggested the Devil wanted one. He offered to let the Devil stand on his shoulders so that the Devil could pick them.

As soon as the Devil had climbed up into the tree, Jack took out his pocketknife and carved the sign of the cross on the tree trunk. The Devil could not come down. He ranted and raved to no avail. In despair, he offered Jack 10 years’ peace in exchange for his freedom. Jack insisted that the Devil never bother him again. The Devil, desperate, agreed.

Jack returned to his mean ways. But before the next All Hallow’s Eve, his body gave out, and he died. He tried to enter the gates of heaven, but was turned away because of his meanness in life. He then went to the gates of hell. The Devil refused him, saying he had promised never to bother him. He told Jack to return whence he had come. To help Jack find his way in the dark, the Devil threw out a piece of coal from hell. Jack put it inside a turnip. It became a jack-o’-lantern and has been Jack’s light on his eternal wanderings around the earth ever since.

Different versions of this story were created in America. In the south in the 1800s, one popular version in black culture told of Grandpappy, who lost his way in the woods, saw a light and started to follow it. The light led him astray. When Grandpappy realized he had been tricked by a “jack-ma-lantern,” he was mad as a hornet. But he knew what to do. He turned his pockets inside out, drew a ring in his path, made a cross on the ground, and said, “In the name of the Father and the Son and the Holy Spirit, drive these witches away with their evil jack-ma-lanterns.”

An American version of the Irish Jack story says that Jack sold his soul outright to the Devil at midnight one night at a Crossroads. He bargained a seven-year grace period, during which he could do whatever he pleased. At the end of the period, the Devil came to collect Jack’s soul. Jack put the sole of an old shoe above his door and asked the Devil to retrieve it for him. When the Devil reached up, Jack nailed his hand to the wall and left him hanging. He released the Devil only after extracting a promise never to bother him again. When Jack died, he could enter neither heaven nor hell. The Devil threw a piece of fire at him, saying Jack was too smart for him. Jack was forced to wander eternally, and his only entertainment was leading people into swamps and mudholes at night.

One can protect oneself from a jack-o’-lantern by carrying an object made of IRON, which is believed to repel evil spirits. In Scottish lore, sticking an iron knife into the ground does the trick. Irish lore warns children who are caught outdoors after dark to wear their jackets inside out in order not to be lured astray by a jack-o’-lantern. By doing so, the wearer is disguised, and shows the evil spirits that he or she has nothing for them. These remedies were transplanted to America, along with the procedure of flinging oneself to the ground, shutting the eyes, holding the breath and plugging the ears until the jack-o’-lantern passes.

Jack-o’-lantern lights that are part of Halloween festivities descend from an old Irish custom of using carved-out turnips or beets with candles as lanterns. On Halloween, such lights represented the souls of the dead or Goblins freed from the dead. The Irish who immigrated to America found pumpkins a suitable substitute for turnips and beets. In the United States, pumpkin jack-o’-lanterns have been an essential part of Halloween celebrations since Victorian days.

jack-o’-lantern A phosphorescent light seen in marsh and swamp areas, which in folklore is either the manifestation of a malicious lost soul or a death omen. Jacko’-lantern is known by various names, including will-o’-the-wisp and corpse light (England); fairy light and fox fire (Ireland).

According to most legends, the jack-o’-lantern is a wandering soul who has been denied entry into both heaven and hell. Clothed in a luminous garment or carrying a lighted wisp of straw, it drifts about at night, scaring travelers and beckoning them to follow it into the marshes. charms to protect oneself against the spirit include carrying an object made of Iron, which is believed to repel evil spirits, or sticking an iron knife into the ground.

In Ireland, children who are caught outdoors after dark are told to wear their jackets inside-out in order not to be lured astray by a jack-o’-lantern. In Sweden, the spirit is believed to be the soul of an unbaptized child, who tries to lead travelers to water in hopes of receiving baptism. The jack-o’-lantern also appears in American Indian and Appalachian folklore. The Penobscot Indians call it the “fire Demon,” who has lighted fingertips which it spins in a wheel, and skims the milk at dairies during the night.

In the Appalachians, mysterious, firelike balls of light appear in the hills at night and float, move and bob about the countryside. Some are quite large and rise high into the air; others light up the surroundings like daylight. In Africa, the jack-o’-lantern light is called a “witch-fire” and is believed to be the witch herself, flying through the air, or a light sent by the witch to scare wrongdoers. As a corpse light, the eerie glow forecasts death in a household by hovering over a rooftop or even appearing on top of the chest of the person who is about to die.

In American lore, the jack-o’-lantern is associated with witches and the Halloween custom of trick-or-treating. It is customary for trick-or-treaters to carry pumpkin jack o’-lanterns to frighten away evil spirits.