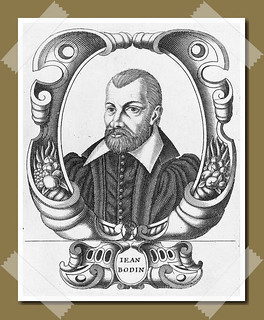 Jean Bodin (1529-1596) was a French Demonologist and political theorist who encouraged the vicious persecution of witches and helped fan the fires of the Inquisition throughout Europe. Jean Bodin said that people who denied the existence of witchcraft were witches themselves and said that, with rare exceptions, no accused witch should go unpunished.

Bodin was born in Angers, France. For a time, he served as a Carmelite monk. He left the monastery for the University of Toulouse, where he became a professor of Roman law. Bodin possessed a brilliant intellect and distinguished himself in his studies of philosophy, law, classics and economics.

In 1561 he left Toulouse for Paris, where he worked in the service of the king. But his book Six livres de la republique, published in 1576, caused him to fall out of favor with the king because of its concept that sovereign power belonged to the people.

Bodin wrote other works of political theory, but he is best known for his treatise on witchcraft, De la Demonomanie des sorciers (The Demonomania of Witches), published in 1580. The book was an immediate success and was reprinted frequently throughout Europe.

Like the Malleus Maleficarum published nearly 100 years earlier, it served as a guide to witch-hunters and judges in the matters of identifying, prosecuting and executing witches. Bodin drew on his own experience as a judge at numerous witchcraft trials.

Demonomanie describes witches, their methods of diabolic acts and their abilities, such as pacts with Satan (see also Devil's pact), flying through the air to their sabbats, copulating with incubi and succubi and casting evil spells.

It also acknowledges that there are good daemons as well as evil Demons, and that good daemons can communicate with man and provide inspiration. He himself had such a daemon, who whispered instructions in his ear.

Bodin believed that authorities were too soft in prosecuting witches, whom he saw less as heretics and more as social deviants.

He condoned convicting the accused on the basis of lies by informants, confessions made under torture, secret accusations and false promises of leniency. He urged local authorities to encourage secret accusations by placing a black box in the church for anonymous letters.

He was adamant about torturing and punishing witches, saying that God would reject those who did not do so:

Those too who let the witches escape, or who do not punish them with the utmost rigor, may rest assured that they will be abandoned by God to the mercy of the witches. And the country which shall tolerate this will be scourged with pestilences, famines, and wars; and those which shall take vengeance on the witches will be blessed by him and will make his anger cease.

Even children and invalids were not to be spared torture, as Bodin Demonstrated time and again by his own example as judge. Children, he said, should be forced to testify against their accused parents. One of his favored methods was cauterizing flesh with a red-hot iron and then cutting out the putrefied flesh. That torture, he said, was mild compared to the hell that awaited the condemned witch. Bodin took exception with Exorcism, however, which he said was both ineffective and dangerous to the exorcist.

Music was preferable as a form of exorcism; in the Old Testament, Saul's possession had been calmed by music. Bodin did not believe that a person could cause another to become possessed (see also Possession). Bodin savagely criticized Johann Weyer, a Lutheran physician and contemporary, who opposed the burning of witches and maintained they were helpless victims. Bodin said Weyer's books should be burned. Except for Demonomanie, which served the purpose of the church, all of Bodin's other books on political theory were condemned by the Inquisition.

Bodin died in Laon, a victim of the bubonic plague.