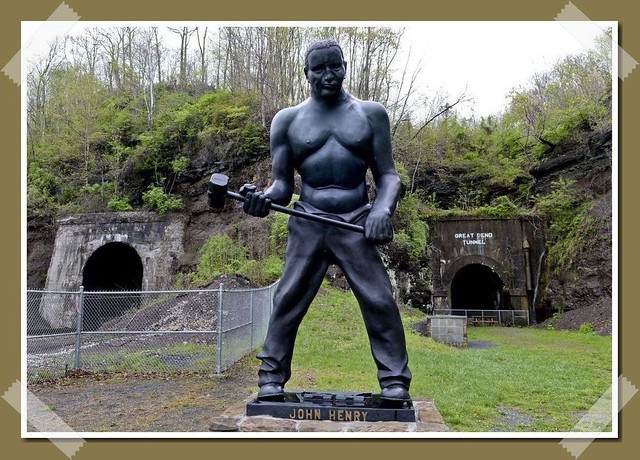 John Henry In American folklore, a black hero, born in Black River Country “where the sun don’t never shine.” When John Henry was born, he weighed 44 pounds. His mother said he had a “bass voice like a preacher,” and his father said “He got shoulders like a cotton-rollin’ rousterabout.”

When John Henry finished his first meal, he went out in search of work. Eventually he found his way to the Chesapeake & Ohio Railroad, which at that time was laying track and driving (digging) tunnels. The major episode in his legend tells of his contest with a steam drill. John Henry drove faster than the steam drill but died “with a hammer in his hand” from the exertion, according to one John Henry ballad.

In another account he died during the night from a burst blood vessel. Other accounts say John Henry died on the gallows for murdering a man. He appears in Roark Bradford’s novel John Henry, as well as in numerous American ballads that were collected by Guy B. Johnson in John Henry: Tracking Down a Negro Legend.

Guy Johnson’s research indicated that the earliest John Henry ballads originated in the oral tradition of hammer songs in the 1870s and evolved over time into the ballads with which we are familiar today. Alan Lomax recorded several variants of the song in his Prison Songs, Volume II. In some accounts John Henry is said to be white, not black.

Old John In American folklore, a tramp printer who could make type fall into place instantaneously with one sweep of his left hand. At his…

Pedro the Cruel (1334–1369) In medieval history and legend, king of Castile and León, who appears in numerous Spanish ballads. Don Pedro was popular with…

John Chrysostom, St. (Yahweh is gracious, golden-mouthed) (c. 347–407) In Christian legend, one of the Four Greek Doctors of the Church. Invoked against epilepsy. Feast,…

Lucks are objects, such as ornate dishes, cups or goblets, which are kept by families for generations as tokens of good luck and protection against evil.…