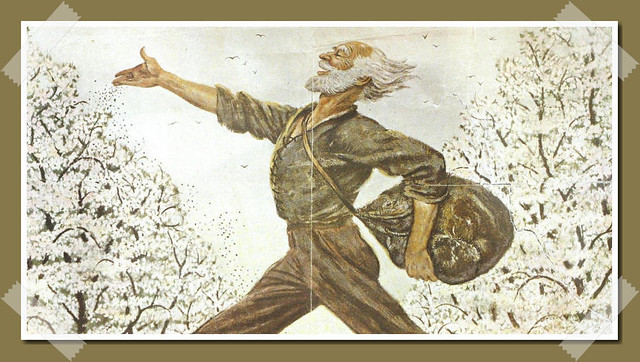 Johnny Appleseed (1774–1847) : In American history and folklore, popular name of John Chapman, Massachusetts-born orchardist, who planted fruit trees in Pennsylvania, Ohio, Indiana, and Illinois. Johnny Appleseed was a hermit and a wanderer who was welcomed wherever he went in the Ohio territory. Everyone loved him, in spite of his unkempt appearance. He always carried a sack full of apple seeds to plant, and walked barefoot all year round. He knew the frontier woods better than anyone. Even the Indians respected Johnny Appleseed for his courage. He appears in numerous legends, a combination St. Francis and Yankee peddler, going from place to place, unharmed by the Indians, carrying his tools and a Bible. He appears in Vachel Lindsay’s free-verse poem “In Praise of Johnny Appleseed” and in the pageant The Return of Johnny Appleseed by Charles Allen Smart.