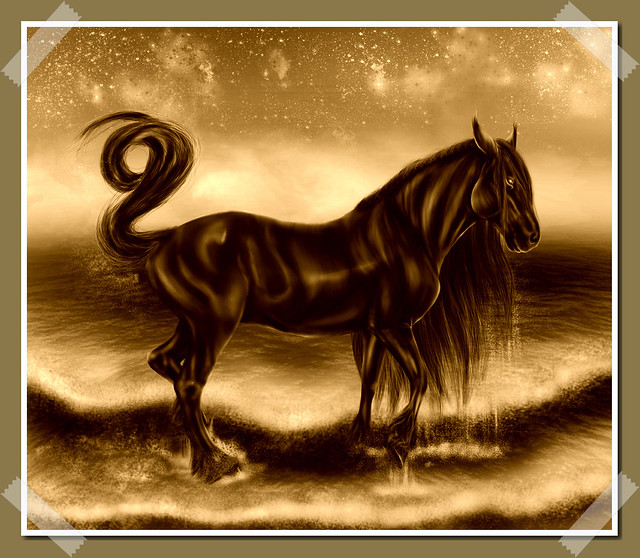 A kelpie is in Scottish folklore, a malevolent water spirit believed to inhabit every lake and stream, and a Death Omen if seen. According to lore, kelpies usually appear in the shape of a horse, but may also assume the form of a shaggy-looking man. They are invariably terrifying to humans.

As horses, they appear on lake and riverbanks, grazing peacefully, and lure travellers to mount them, only to plunge into the waters and drown the hapless victims. Or, the kelpies plunge the victims into the water, where they eat them, save for the livers, which float to the surface. Kelpies also jump on solitary riders and try to crush them in their grip.

They have even been said to tear people into pieces and eat them. They make sounds like thunder to frighten travellers. When in the form of a horse, a kelpie sometimes has a magic bridle. Anyone who forces a kelpie to do something against its will, however, risks being cursed by it and meeting with nothing but misfortune in the future.

To see a kelpie is a harbinger of death by drowning, and nothing will prevent the tragedy from coming to pass. In one Scottish legend called “The Hour is come but not the Man,” a kelpie took the form of a female nymph by a false ford in the River Conan in Ross-shire.

A group of reapers in a nearby field saw the water spirit as it called out, “The hour is come but not the man,” and then plunged into the waters. Just then, a rider on a horse dashed up to the false ford as though to dive in after the kelpie, but the reapers interceded, stopped the horse and dragged the man, kicking and screaming, into a nearby church. They told him they would keep him locked there for an hour—the “Ill Hour,” they called it, as the kelpie was trying to work evil for that period of time.

When the hour was up, the reapers returned to the church, only to find their man dead—he had fallen into a stone trough of water and drowned himself. Other versions of this legend are found in Britain, Norway and Denmark.

Kelpies are shape-shifting Scottish water spirits usually found near running, moving water like rivers or streams. Kelpies are notorious for abducting people either just to drown them or to carry them back to their own realm to live among them, marry and have Kelpie children. They may abduct human women to be mid-wives or wet-nurses.

The Kelpie assumes the form of an attractive horse or pony walking alone on the shore. It looks docile and may make overtures inviting a person onto its back. It’s typically saddled and ready to ride and just looks like a friendly pony who has somehow gotten separated from its people. It’s a trick. If you get on the Kelpie’s back, it may walk nicely for a little bit, offering a pleasant pony ride but ultimately it plunges deep into the water. Kelpies are spirits: they don’t have to come up for air.

One would imagine that the simplest solution would be to just avoid strange, lone horses on the shore but many actively seek Kelpies because theoretically they can be commanded and controlled. The Kelpie’s Achilles heel is its bridle. Capture the bridle: control the Kelpie. Kelpies are not horses; they are spirits and thus can perform many magical functions. According to legend, Scotland’s Clan MacGregor is in possession of such a Kelpie bridle.

Kelpies may be oracular horse spirits to whom human sacrifices were once made.

Whether Kelpies also haunt lochs (including Loch Ness) or whether these are the exclusive stomping grounds of the Each Uisge, Scotland’s dangerous salt water horse spirit is subject for cantankerous debate. However, this is a fine detail that is probably irrelevant to either horse spirits’ victims.

The standard form taken by a Kelpie is equine. The clue to its true identity may be a mane and tail that won’t stop dripping even on a dry day. Kelpies are not restricted to equine form and may be full of surprises. Female Kelpies are described as manifesting in the form of beautiful women dressed in green.