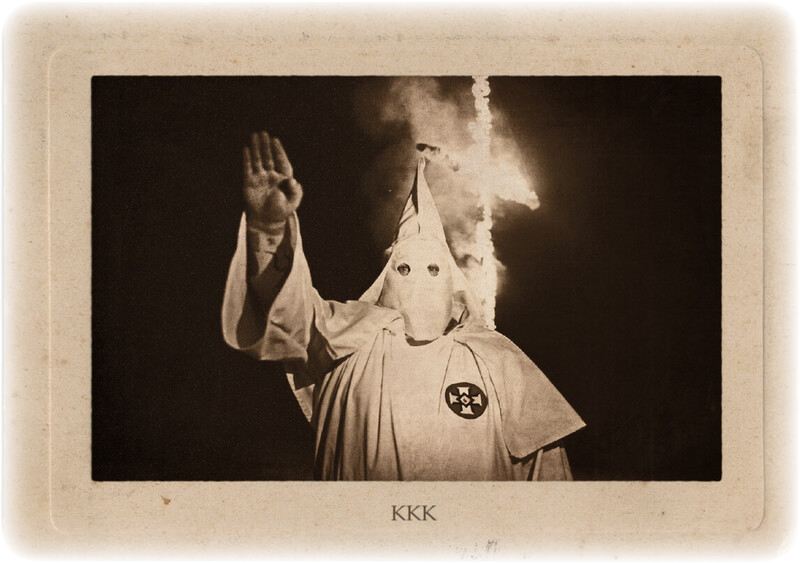 The Ku Klux Klan,born in 1865,had nearly died out until Hollywood resurrected it in 1915. On December 24, 1865, in Pulaski, Tennessee, General Nathan Bedford Forrest and a small band of former Confederate soldiers decided that they had to do something to restore the Democratic Party in the South after the Civil War and to help Dixie shake off the oppressive yoke imposed upon it by Radical Republican carpetbaggers who were taking advantage of the era of Reconstruction to line their own pockets. And there was the matter of the Federal troops who backed up the Freedmen’s Bureau, established by Congress in 1865, in looking after the former slaves. In 1866 the bureau spent $17 million building four thousand schools, a hundred hospitals, and an undeclared number of homes for the blacks who had once toiled in the fields for their food and shelter as enslaved people. Now war-ravaged southern white families were poor and being treated like slaves. Something had to be done.

The name Ku Klux Klan (KKK) comes from the Greek word for “circle,” kyklos , and the Scots-Gaelic clan . Klansmen dressed in white robes because they represented the ghosts of the brave Confederate dead; hoods protected the anonymity of individuals who were performing good deeds for their neighbours. Some researchers have said that the robes and hoods were in imitation of the Knights Templar and a symbol of humility. General Forrest was the first grand wizard, and he presided at a convention of the Klan held in Nashville in 1866. There was growing concern in the South that elevating the political and social status of the blacks would threaten white supremacy. Southerners especially feared the schools being constructed: the image of the former slaves as educated men and women was not an easy one for them to accept. The Klan set out to curb black education and advancement by fear tactics and violence, and those white southerners who attempted to interfere, especially if they were Republicans, were punished with the same brute force. The KKK became the strong-arm enforcers of the Democratic Party in the South. As the federal government withdrew its control of the former Confederate states, local white governments reestablished their power and put segregation laws in place. The blacks may have been freed, but they soon found that their freedom had definite boundaries that must be honoured. General Forrest had protested the Fourteenth Amendment,which guaranteed adult male suffrage,and he wished to do everything in his power to stop blacks from voting. Essentially an antebellum southern gentleman,Forrest declared that his main purpose in establishing the Klan was the protection of southern womanhood. However,as the Klan became more powerful and brutal,Forrest was appalled at the violence and hatred perpetrated by the group that he had organized. The KKK had become synonymous with torture,destruction of private property,and even murder. In 1869 Forrest disbanded the Ku Klux Klan. By then, however, the Klan had become a many-headed monster and had established itself in too many locations to be easily controlled, much less halted. Some Klansmen who cherished a gallant view of the South followed their general’s order to disband, but by 1870 the Klan had scattered into dozens of individual groups that paid no heed to General Forrest’s order to abandon violent night raids and the practice of organized fear and intimidation. In 1871 President Ulysses S. Grant made the Klan an illegal terrorist group by signing the Ku Klux Act. The authorization and use of federal force against the Klan destroyed those who wore the hood and white robe in South Carolina and virtually eliminated the nightriders in the rest of the nation. The Klan faded into the shadows. White supremacy and strict segregation laws eventually became firmly established throughout the South, so there was no real need for the White Brotherhood, the Men of Justice, the Constitutional Union Guards, or the Knights of the White Camelia to sow death and destruction on a regular basis. The Ku Klux Klan practically disappeared until 1915 when a preacher named William J. Simmons was influenced by Thomas Dixon’s book The Clansman (1905) and D. W. Griffith’s film adaptation, The Birth of a Nation (1915),and re-formed the White Brotherhood.

Ku Klux Klan Timeline 1918: After World War I, the Klan turns its attention to immigrants, singling out Jews, Roman Catholics, socialists and communists, and other “foreigners.” 1920: The National Association for the Advancement of Coloured People (NAACP) defies the Klan by holding its annual convention in Atlanta, at that time a stronghold of the KKK. 1922: Hiram W. Evans becomes the imperial wizard of the KKK. Under his leadership the KKK grows rapidly and elects state officials in Texas, Oklahoma, Indiana, Oregon, and Maine. 1925: KKK membership reaches 4 million. They are nearly impervious to arrest,much less conviction,in small southern communities. 1944: The organization is disbanded again after a number of Klan leaders are arrested for corruption and murder and the nation weathers first a Great Depression and then World War II. 1950s: The KKK is revived when the civil rights movement heads south. Robert Shelton organizes the White Knights of the Ku Klux Klan, and nightriders once again terrorize those blacks who want to vote. Lynching is still used as method of controlling the black population. September 15,1963: A bomb explodes under the steps of the Sixteenth Street Baptist Church in Birmingham Alabama, injuring twenty-three and killing four girls—three fourteen-year-olds and one eleven-year-old. October 8,1963: Robert Chambliss, a member of the KKK identified as the man who placed the Birmingham church bomb, is found not guilty of murder, fined one hundred dollars, and sentenced to six months in jail for possessing a box of 122 sticks of dynamite without a permit. Summer 1964: The KKK instigates the firebombing of thirty black homes, thirtyseven black churches, and the beatings of over eighty civil rights volunteers. James Chaney, Andrew Goodman, and Michael Schwerner are murdered by the KKK on June 21 in Mississippi. March 21,1981: Henry Hays, son of the second-highest-ranked Klansman in Alabama, and James Knowles abduct nineteen-year-old Michael Donald and lynch him. Local police claim Donald’s death is the result of a drug deal gone bad. June–December 1983: Knowles is found guilty and sentenced to life and Hays is found guilty and sentenced to death for the murder of Michael Donald. February 1987: Morris Dees and Joseph J. Levin of the Southern Poverty Law Center (SPLC) support Beulah Mae Donald, who launches a civil suit against the KKK for the lynching death of her son Michael. The allwhite jury finds the KKK responsible and orders it to pay damages of $7 million, resulting in the Klan’s turning over all its assets, including the national headquarters in Tuscaloosa. June 6,1997: Henry Hays is the first white man executed for a murder of an African American since 1913. May 17,2000: The FBI announces that a splinter group of the KKK,the Cahaba Boys (Robert Chambliss,Herman Cash,Thomas Blanton,and Frank Cherry),carried out the Sixteenth Street Baptist Church bombing and the murders of Denise McNair,Addie Mae Collins, Carole Robertson,and Cynthia Wesley. May 2002: Seventy-one-year-old Frank Cherry of the Cahaba Boys is sentenced to life in prison. June 21,2005: Forty-one years to the day that the civil rights workers Chaney, Goodman, and Schwerner disappeared, former Klansman Ray Killen, eighty, is convicted of manslaughter and sentenced to twenty years in prison for each killing. Today the name Ku Klux Klan has become public domain, and dozens of groups use all or part of the name in their titles.

On July 6, 1885, Britain’s Pall Mall Gazette ran the ﬁrst installment of a series titled “The Maiden Tribute of Modern Babylon,” detailing the alleged…

Fort Fisher is widely known for its role as the protector of last trade stronghold of the South during the Civil War. Wilmington was the…