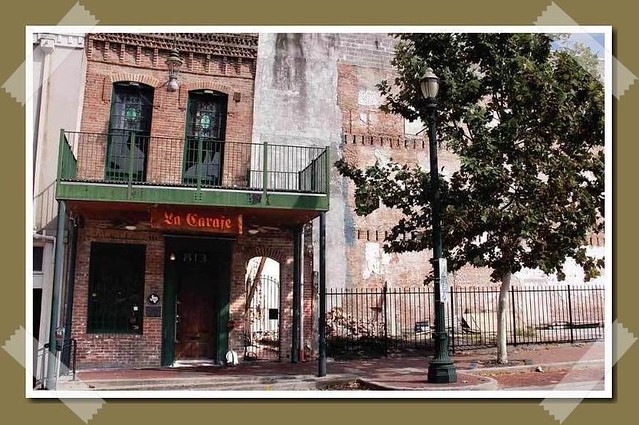 La Carafe sits in the oldest commercial building in Houston, still resting on its original foundation. The building was built for Irishman John Kennedy about the year 1860 and may have been erected by developer Nathaniel Kellum. Kennedy, a baker, came to Houston in 1842, and after operating several businesses in the area, he erected the building housing La Carafe to function as a steam bakery. Known originally as the Kennedy Bakery, it served that function for a number of years. The structure remained in the Kennedy family until 1987, when the present owners purchased it. It became La Carafe in the 1950s and has served the bakery, bar, and restaurant function since its original construction. The hauntings of La Carafe include encounters with a well-liked former bar manager named Carl, whom many have either seen looking out of the window on the second floor or they have felt his presence. Other reports include the sound of a ball being rolled on the second floor, a bar glass being thrown that was captured on the audio piece of a video shot by a Canadian TV crew, and many other encounters. When interviewing Gavin, the bar manager at La Carafe, he told me of a story regarding Carl. Gavin said that a La Carafe bartender was closing up one evening and was walking to his car. He felt as if someone was staring at him, so he looked over his shoulder back at the bar and saw a man in the window. Thinking he locked someone in, he went back. Upon entry, he asked the person to come downstairs.

When no one responded, he went upstairs, but found no one there. “That bartender didn’t work nights again,” Gavin said. Patrons have reported cold spots in the restrooms, glasses breaking, and footsteps either upstairs or on the stairs. If you like your spirits with spirits, this is a great haunt.

Back to Haunted Texas