A Leviathan is in Hebrew lore a, primordial monster Demon of the seas and king of beasts. Leviathan is described in the book of Job as a huge whalelike creature who is nearly invulnerable; spears do no more than tickle him:

His back is made of rows of shields, Shut up closely as with a seal. . . . His sneezings flash forth light, And his eyes are like eyelids of the dawn. Out of the mouth go flaming torches; Sparks of fire leap forth. . . . In his neck abides strength, And terror dances before him.

The book of Jonah tells about Jonah, who flees from God’s wrath across the sea toward the city of Tarshish. Along the way, God sends a tempest, and the ship’s crew find out that Jonah is the cause. They throw him overboard and he is swallowed by Leviathan. For three days, he is imprisoned in the belly of the beast, and then God forces Leviathan to vomit him up on land.

John Milton, in his epic poem Paradise Lost, describes Leviathan as “the Arch-Fiend,” who lurks about the seas around Scandinavia. He would rise to the surface and fool sailors into thinking his huge bulk was actually land. When the ships were close, he would drag them down and sink them.

Leviathan was one of the possessing Demons named in the Loudun Possessions. He is ruler of Envy, the fourth of the Seven Deadly Sins. 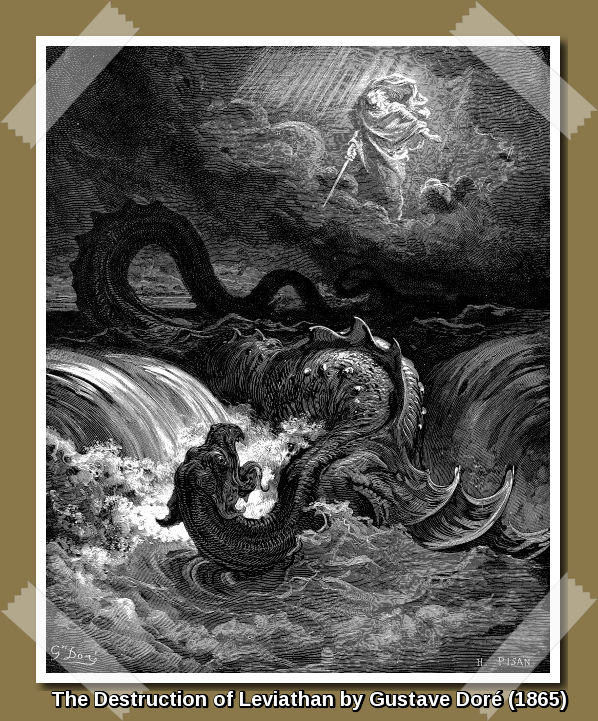 Making an offering to Leviathan :