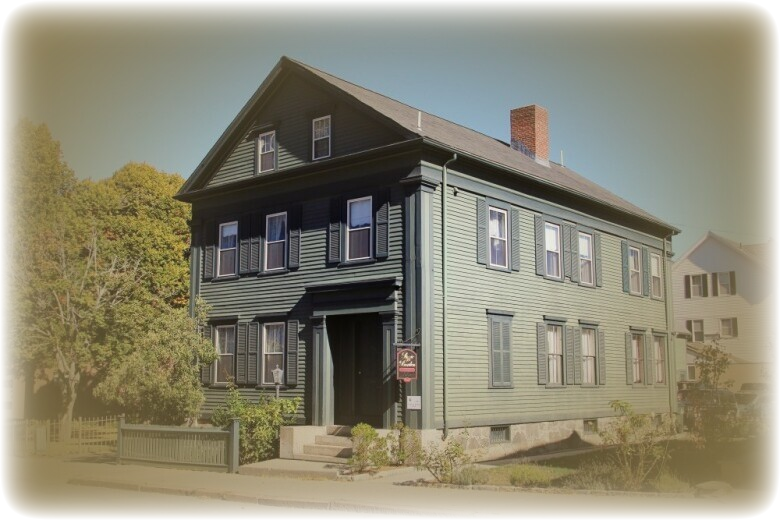 The Lizzie Borden House is a house where gruesome axe murders took place in Fall River, Massachusetts, in 1892. Daughter Lizzie Borden was charged with murdering her father, Andrew J. Borden, and her stepmother, Abigail, by hacking them to death. She was tried and acquitted. Her family house is now a bed and breakfast.

Borden was born in Fall River on July 19, 1860, the third child of Andrew J. Borden and his first wife, Sara. When Lizzie was three, her mother died. Andrew subsequently married Abigail. Andrew was a successful businessman and banking executive, who owned a business that made and imported coffins. He made money off the misfortunes of the American Civil War, buying the real estate of widows who could no longer afford their properties, renting it back to them, raising the rent, and evicting them.

The Borden home in Fall River was constructed in Greek Revival style in 1845 at 92 Second Street, in a middle- class neighborhood. Borden bought it in 1872. Tightfisted, Andrew ran his family the way he ran his business, subjecting his wife and daughters to harsh frugality. The house had no running water, fl ushing toilets, or electricity, even though all were available at the time. Borden considered them to be unnecessary luxuries. The family used whale oil lamps, chamber pots, and heated water on the stove.

Borden was also known for being cheap about food, forcing his family to eat slightly rancid meat rather than throw it out. The Bordens often had digestive problems. It is likely that all members of the family were severely emotionally repressed. Lizzie grew up a religious and devout child and taught Sunday school. She and her sister Emma were spinsters. Prior to the murders, the elder Bordens suffered unusual stomach problems, and Abigail voiced her suspicions to their family doctor that someone was trying to poison them.

On the morning of August 4, 1892, Abigail was upstairs and Andrew came home early because he was not feeling well. Their bloody bodies were found, Andrew in the parlor and Abigail in the guest chamber, both severely hacked in the face and head with what appeared to have been a small hatchet. At the time of the killings, the maid, Bridget Sullivan, was outside washing windows and then was resting in her room upstairs on the third floor. She heard an alarmed Lizzie call to her to come down, for her father was dead in the parlor. Lizzie said someone had entered the house and murdered him, and she had found his body. Sullivan and a neighbor, Adelaide Churchill, who came to their aid discovered the body of Abigail, similarly hacked to death. Abigail’s body was cold and Andrew’s was warm, indicating that Abigail had been killed first.

At first, suspicion landed on a Portuguese laborer who had appeared at the home earlier in the day and asked for his wages. He was sent away by Andrew, who told him to come back later. After several days, suspicion shifted to Lizzie. Emma was out of the house at the time of the murders and the maid was upstairs. No one could account for Lizzie’s whereabouts but herself. She claimed to have been outside in the barn at about the time Andrew was killed—but no footsteps or traces of her presence were ever found in the dusty barn. The details of her story kept changing. The murder weapon was never found. Lizzie’s clothing was not examined, out of a sense of propriety at the time.

At an inquest on August 9, Lizzie gave confused and contradictory answers to questions. A family friend said she had seen Lizzie burn a blue dress in the kitchen oven, claiming it was covered with “old paint.” Bridget testified that Lizzie had worn a blue dress on the morning of the murders. A druggist claimed that on the day before the murders, Lizzie had attempted to buy prussic acid. The grand jury returned an indictment.

Lizzie was charged with double murder and pleaded not guilty. Her trial began on June 5, 1893, in New Bedford and proved a sensational event covered by the media. The Bordens’ skulls were admitted as evidence, causing Lizzie to faint. Emma testified that Lizzie had been close to her father and had had cordial relations with her stepmother, even though Lizzie coldly called Abigail “Mrs. Borden” instead of “mother” or similar endearment.

The court refused to allow key evidence that supported the prosecution’s case: Lizzie’s testimony at the inquest and the druggist’s testimony. Lizzie had not been advised of her right to remain silent under the Fifth Amendment to the Constitution. The jury deliberated for one-and-a-half hours and returned a verdict of not guilty.

In the aftermath of the trial, community debate ranged over the verdict. Though legally cleared, Lizzie found herself effectively cut off from the rest of the community. People shunned her. Gossips could not help but comment that Lizzie and Emma had a fi nancial motive to murder Andrew and Abigail—and to make certain Abigail was dead first. Had Abigail been murdered second, her family would have inherited Andrew’s money, not Lizzie and Emma.

The sisters bought themselves a nice home in Fall River, which Lizzie named “Maplecroft.” They moved there, and rented out their family home until 1918, when they sold it. They became active in the theater world and participated in the social circles frequented by actors, artists, and writers. In 1905, Emma left Maplecroft and went to live on her own, eventually settling in New Market, New Hampshire. There she changed her surname to Smith. Reportedly, she said she could no longer bear to be with Lizzie. Lizzie remained at Maplecroft for the rest of her life, dying at age 67 in 1927. Emma died nine days later. They are buried by the graves of Andrew and Abigail in Fall River’s Oak Grove Cemetery.

The murders remain unsolved. Lizzie is the most likely suspect, but no direct evidence ever tied her to the gruesome crime. She never made any confession later in life. How the maid could have been oblivious to the sounds of two people being brutally murdered also has never been explained.

The Borden house was a private residence until 1996 and then became a bed-and-breakfast. In 2003, it was purchased by Donald Woods and Lee-ann Wilber, who renovated the interior.

Bridget’s bedroom on the third floor and the staircase near it are active areas, with cold breezes and the displacement of objects in the room. Lee-ann Wilber, who sleeps in Bridget’s room on occasion, has felt tapped and prodded and once felt as though the Ghost of a sad, depressed person passed through her body.

Visitors and guests have reported taps and prods and fleeting glimpses of Apparitions and Shadow People. Some have taken photographs showing purported anomalies, such as mist and ORBS. The parlor, the scene of Andrew’s murder, is particularly active, as is the bedroom of Abigail. Doors open and shut by themselves. In the kitchen, coffeepots have moved on their own and one broke of its own accord in the sink.

Two ghost children have been reported in the house. They are believed to be James and Sally, children who lived next door to the Borden house and died in a WELL.

Abigail (a father’s joy) In the Bible, O.T., a beautiful woman; wife of Nabal (the fool), a wealthy sheep owner. She supported David with food…

WilliamGraves (17th century) Connecticut man accused of witchcraft over a dispute with his daughter and son-in-law. Though no legal action was taken against William Graves,…

Edgewood Plantation You have to feel sorry for this poor ghost: legend has it, Lizzie Rowland died of a broken heart waiting in vain for…

Andrew, St. (manly) (first century) In the Bible, N.T., one of the Twelve Apostles of Jesus; patron saint of Russia and Scotland; protector of fishermen,…