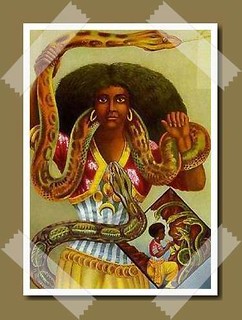 Lubana is a cemetery spirit; the sacred snake of the charnel house. She is a spirit of birth, death, life, and sex who unblocks roads, removing obstacles from the paths of her devotees. She opens the gates of opportunity. Lubana is a cleansing spirit who removes negativity and spiritual and psychic toxins (snake venom as antidote). Can she remove a curse? Yes, she can.

Lubana began her incarnation as a Congolese Simbi spirit. Transported to the island of Hispaniola by the slave trade; she was a comparatively obscure local spirit until the late 20th century when the image of Mami Waters arrived in the Americas. The German circus poster of a snake charmer that catapulted Mami Waters to worldwide fame served as a portal for Lubana, too. Dominican immigrants brought Lubana to the United States; her fame continues to increase.

Congolese snake spirits were transported to the Caribbean; so was an old traditional style of Iberian spellcasting, incorporating verbal petitions to aggressive spirits requesting that they impose the spell-caster’s will on others. For instance, Spanish love/domination spells invoke Saint Martha the Dominator, requesting that she force an errant man to return to the spell-caster so subservient that he’s crawling on his belly like a snake. Lubana is now invoked in virtually identical love-spells whose goal is to force a man to crawl afterthe woman he once scorned, begging on his knees. (If the spell goes correctly; the man wants to do this. He feels compelled. He’s unresisting.)

Although Lubana is also commonly called Filomena, she is not identified with the young virgin martyr, Saint Philomena. Instead, she is syncretized to Saint Martha the Dominator. In Latin America, the snake-charmer image associated elsewhere with Mami Waters was identified as Saint Martha who is usually depicted with a dragon or great reptile.

Snake Oil, a mass produced condition oil (magical formula oil), is used to dress Lubana’s candles and summon her. Serpentine-inspired fine perfume oils like Black Phoenix Alchemy Lab’s Snake Oil may also accomplish this purpose. If you want to visit her, Lubana lives in the cemetery.

Lubana’s true form is a snake but she may also manifest as a woman who displays serpentine behaviour (hissing, slithering, sticking out her tongue …). She may have snakelike physical features. Regardless of form, Lubana doesn’t speak: she hisses or communicates telepathically. (Telepathically she may use words and be quite articulate.)

The image most frequently used to depict Lubana is that of the snake charmer more commonly associated with Mami Waters. Votive statues based on that image are now mass produced and may be labeled Martha the Dominator (Santa Marta Dominadora). Different versions of the statue exist; some hew closely to the old poster even duplicating the hairstyle; others depict her with significantly fairer complexion. Martha/Lubana wears a green dress and holds a snake. A small boy sitting on her lap holds a smaller snake. The second figure in the old poster has been reinterpreted as a child saved from a snake by the snake charmer.

Her offerings are traditionally placed on the floor, although theoretically, a snake climbs anywhere.

Cigars; unsweetened black coffee; Malta beverage (not malt liquor; Malta is a type of carbonated drink whose primary ingredient is barley, which is allowed to ferment or ”malt”). Malta is available worldwide, sold under different brand names; it may also be sold as champagne cola, although it’s neither champagne nor cola; however, beware: although Malta may be called champagne cola, not every champagne cola is Malta.

Place one whole, unbroken, raw egg on a bed of coffee grounds

Drizzle with honey and Malta and serve

Sili Kenwa is a Dominican manifestation of the lwa known in Haiti as Ezili Coeur Noir, or “Black Hearted Ezili”. Sili Kenwa is syncretized to…

Metresa The Caribbean island of Hispaniola is divided into two nations: Haiti and the Dominican Republic. Although Vodou has historically been associated with Haiti, related…

ANAISA PYÉ – QUEEN OF LOVE Anaisa Pyé is among the most beloved of the spirits of the Twenty-One Divisions, a beautiful, laughing, joyous, flirtatious…