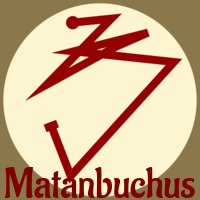 Matanbuchus: An alternate name for the demon Belial given in chapter 2, verse 4, of the apocryphal Ascension of Isaiah. Here, Belial, named Beliar, is presented as the angel of lawlessness. He is also described as the true ruler of the world.

The Dictionary of Demons written by Michelle Belanger.

Edited and revised for the Web by Occult Media, the 23rd of April 2021. We use British English spelling.

Mahazael: According to the Mathers edition of the Sacred Magic of Abramelin the Mage, this demon’s name means “the Devourer.” In his Three Books of…

Menail: A demon named in the True Keys of Solomon. According to this text, this demon can render anyone invisible. Menail is said to serve…

Kleim: A demon of earthquakes, Kleim is named in the True Keys of Solomon, where he is said to serve Sirachi, the immediate chief of…

Kipokis: A demon said to serve the infernal lord Beelzebub, Kipokis appears in the Sacred Magic of Abramelin the Mage. An alternate spelling of this…

Metathiax: According to the Testament of Solomon, Metathiax is a demon of disease that causes the veins to ache. One of thirty-six demons associated with…