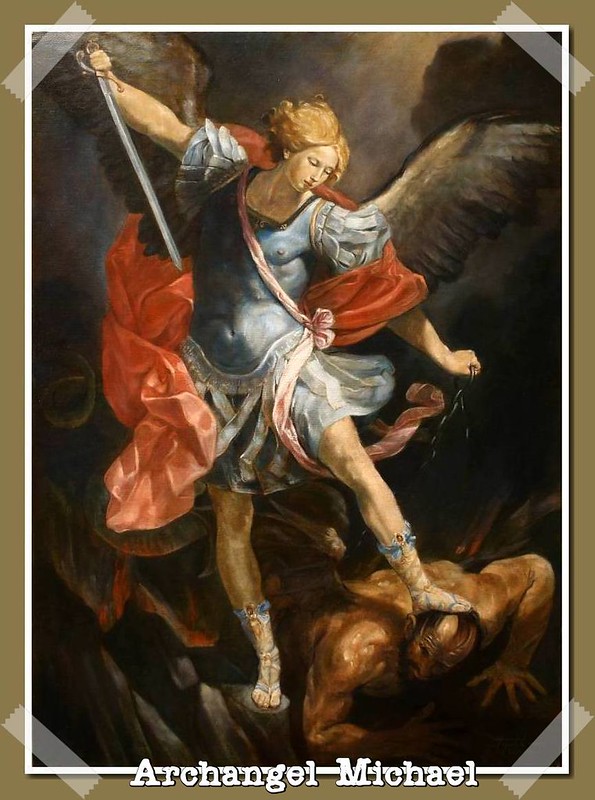 Michael : Captain of the Lord’s House; Prince of the Heavenly Host

If there was ever an angelic popularity contest, it’s likely that Michael Archangel would win. Michael is beloved by Pagans, Jews, Christians, Muslims, and the unaffiliated. His name means “who is like the Lord.” Statement or question? You decide.

Michael is head of the Lord’s Army. He crushed the Rebel Angels. Legend has it that if Lucifer could only have persuaded Michael to join him, Heaven would have been overthrown.

Michael is the angel of righteousness—he does what is right. He cannot be bribed. He is allegedly among the few angels who know the Ineffable Name of Power.

Michael is invoked for protection from anything that frightens you. If you are worried about the safety of loved ones, Michael may be petitioned on their behalf. He accepts petitions from one person on behalf of another. He is the archangel of justice and may be invoked to provide justice for crimes committed against you. He is the special protector of victims of rape and may be invoked for protection against sexual abuse.

Michael to the right of me,

Michael to the left of me,

Michael all around me,

Michael, with your flaming sword

of cobalt blue, please protect me.

This charm’s power is enhanced by simultaneously visualizing being surrounded by cobalt blue flames emanating from Michael’s sword. Further appeals may be added at the end of the charm. (For example, Michael, please protect my cat, my dog, my true love and so forth. Be as specific as possible. Name and visualize your desire.)

Michael has dominion over fire magic and candle spells. He is the angel of fire safety, also invoked for safety at sea. He is the patron of those suffering from sea sickness or motion sickness. Moroccan folklore suggests that precipitation (rain, snow, hail) falls from a celestial reservoir or sea. Michael presides over this sea. Precipitation only occurs according to his command.

Michael serves as a psychopomp, escorting dead souls to the next realm and guarding them on their journey. Russian folklore envisions him as a ferryman bringing good souls toward Paradise’s radiant light. Michael guards the gates of Paradise. At the Final Judgment, he will weigh the souls of the dead.

Michael is the Angel of Insomnia, which he both heals and causes. According to Jewish legend, the reason King Ahasueros couldn’t sleep in the Queen Esther story is because the Creator sent Michael to afflict him with sleeplessness.

Michael makes frequent public appearances. Apparitions of Michael have been recorded in Mexico, Italy, and France. Most recently, in 1995 and 1996, Egyptian Christians and Muslims witnessed numerous apparitions of Michael in the Church of Saint Michael in the village of Kafr Yusuf Samri. He appeared in various forms both with and without wings. Miracles recorded include exorcisms, healings, and multiplication of oil.

John Travolta played the warrior angel in the 1996 movie, Michael.

Michael takes many forms ranging from a classical winged angel to a being of brilliant, blinding light to a head of garlic. Garlic contains his essence and is thus more than just a protective amulet; it is an actual manifestation of Michael.

Michael is frequently portrayed as a winged Roman soldier. He is commonly portrayed with a dragon; this is now interpreted as representing his victory over Lucifer, but this image may hark back to the days when Michael was worshipped as a deity in Babylonia and Persia. He may once have ridden that dragon. (Sometimes a devil is substituted for the dragon.)

Various directions are attributed to him, usually south or east; the Kabbalah places Michael on the right side. (Gabriel, his compatriot, is on the left.)

29 September, the feast of Michael mas. Coptic tradition recommends the twelfth of each month for requesting protection and help from Michael.

Michael is the patron saint of France. Mont-Saint-Michel in Normandy was dedicated to Michael in 708 CE after the archangel appeared to Aubert, Bishop of Avranches, in a series of dreams, ordering him to transform it into a shrine dedicated to him. Pilgrimage to Mont-Saint-Michel allegedly guarantees smooth passage to the next life. (The waters here Demonstrate some of the strongest tides on Earth.) Mont-Saint-Michel bears a mystical reputation, sometimes associated with the Grail. It may be part of an aligned chain of sacred standing stones including Delos, Delphi, and Mount Carmel.

Frankincense, myrrh, angelica, garlic. In Sicily, he is given sugar and sweet liqueurs.

A Prayer to Saint Michael

Terrorism. War. Earth changes. Violent crime. The threats to our families,nations and environments are enormous. Now more than ever, we need Archangel Michael. This breakthrough…

Michael Bodine shares his most fascinating stories as a celebrity psychic. Discover how Michael receives information from the other side, and how he deals with…

LIBER HVHI, the awaited grimoire of the Luciferian Path is now published containing the infernal rites of the Qlippoth, an extensive ideological and magical system…

In a time of crisis, we need a guide to help us calm and stabilize our lives. This is why Kabbalah is being revealed to…