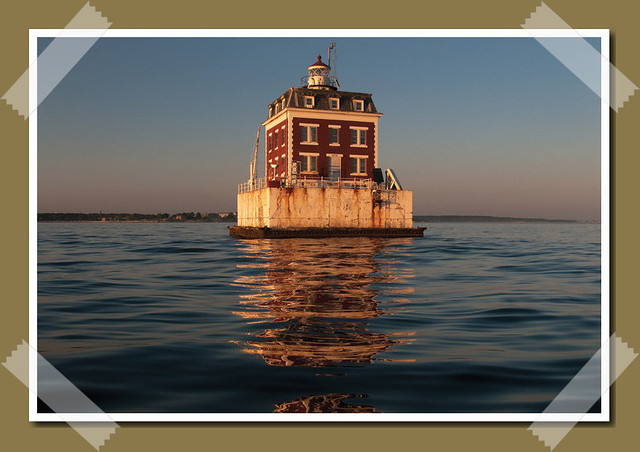 New London Ledge Lighthouse Turn-of-the-20th-century lighthouse near New London, Connecticut, said to be haunted by the anguished spirit of one of its early keepers, according to local legend. The light, which was established in 1910, rises three stories above a square pier. The lighthouse was the lonely home of Ernie, a civilian keeper known only by his first name, and his wife.

According to legend, one day Ernie found his wife gone. A note left behind said she had run off with the captain of the Block Island Ferry. Shattered, Ernie walked up the stairs to the roof of the building and threw himself to his death in the waters below.

The logbooks at New London Ledge do not record such a SUICIDE, but the story is believed so strongly that for decades, the personnel assigned to the lighthouse reported Ernie’s ghostly presence. Phantom footsteps were heard echoing up and down the stairs, and warm rooms suddenly became chilly. There were Poltergeist phenomena of chairs that moved of their own accord and doors that opened and closed by themselves.

Ernie’s presence was reported right up to the day the New London Ledge became automated: May 1, 1987. The last entry in the logbook reads, “Rock of slow torture. Ernie’s domain. Hell on Earth—may New London Ledge’s light shine forever because I’m through. I will watch it from afar while drinking a brew.”

If there was no suicide, the Haunting may be explained in terms of suffi cient popular belief in the story that caused hallucinations. These may have been due in part to mental strain caused by isolation for prolonged periods. In the light’s later years, Coast Guard personnel were assigned 18-month tours of duty. Daily duties called for 12-hour shifts. Six days of shore leave were permitted every one to two weeks. Thus, the personnel themselves may have unwittingly acted as poltergeist agents, or interpreted natural phenomena as being of ghostly origin.

The haunting cannot be discounted completely, however. Lighthouses are renowned for their ghostly inhabitants. It is possible that over the years, events and emotions accumulate to take on the form of phantoms.