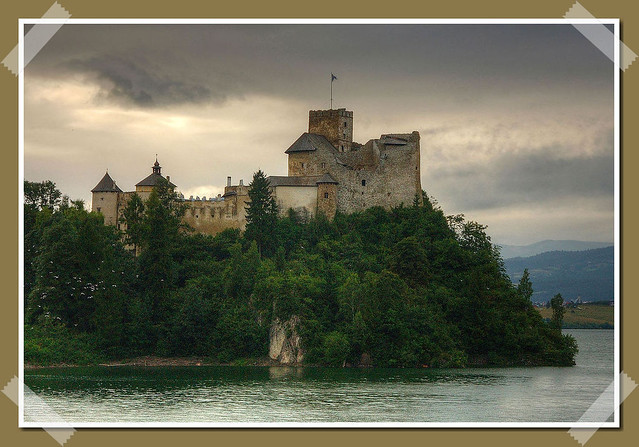 On an ancient hill of limestone and shale 30 meters above the Dunajec River is one of southern Poland’s most haunted locations: Niedzica Castle. The castle holds secrets of hidden treasures, ancient artwork, and a ghostly woman who is said to appear every night. A small sign along the road leading up to the castle features a ghostly caricature, warning those who approach of the spectral resident.

The castle is situated on a small peninsula into the river. From a distance, it’s easy to understand why one would build a castle in this location—not only are the views breathtaking, but the position is highly defendable. There are cliffs, then water on three sides, and only one feasible approach if one were to try to mount an attack. The current castle was built in 1325 by the Hungarian Berzevichy family, though this wasn’t the first fortress on this spot—earthen walls stood to mark the former stronghold. The castle was originally called Dunajec Castle, and it had several owners over the centuries.

The history behind the ghostly legends here stem from one of the castle’s early owners, Sebastian Berzevichy, who went to Peru in South America. There he married a local woman and they had a daughter named Umina, who went on to marry an Inka royal who held his family’s treasure. In the 1860s, when the war between Spain and Peru was coming to an inevitable head, the Berzevichy family moved to Europe to escape the war and made their way back to Niedzica. They brought the Inka family treasure with them so it wouldn’t be captured by the Spanish. The local legend holds that Umina was murdered in front of the castle by a potential treasure thief who was never caught, and Umina’s ghost began to appear every night to scare off any who sought the gold. Umina’s father hid the treasure and created a cryptic document so the riches could be located again one day. But no one has been able to break the code in the document. Today Umina is referred to as the castle’s “White Lady,” and reports of her sighting still come in from locals and visitors.

Today, Niedzica Castle is a museum with archaeological and historical exhibitions from the Spisz region and offers several suites that can accommodate up to 35 guests. The Association of the Art Historians operates the castle today.

Wawel Hill in Kraków has been home to human activity for almost 50,000 years. Archaeologists have uncovered evidence of settlement from the Paleolithic, Neolithic, and…