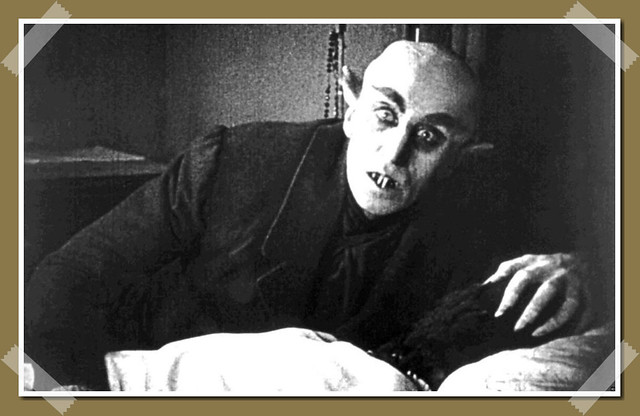 Nosferatu The most famous of all the early vampire films was produced by a small German film company, Prana Film. This had been set up around the end of 1919 to produce and promote films (then silent, black and white films) that had a supernatural theme. In the end, the studio produced only one film, but it was destined to become a classic. This was F.W. Marnau’s Nosfertu, ein symphonie des gruens (a symphony of horror). Although the title was “nosferatu” (a German word for vampire) the action of the film was set in the Carpathian Mountains of Eastern Europe. Marnau used a largely German cast, including the Berlin-born actor Maximillian Schreck, who had initially made his name on the German stage but was now increasingly seen in films. Schreck’s own name is interesting—it is the German word for “terror” or “fight” and it led to the legend that it was not his name at all. In fact, he was at one time said to be an English actor named Alfred Abel, but this rumour was put to rest when the two men appeared together. Because he was a rather private man and not a great deal was known about his background, weird and unsubstantiated tales grew around him.

Schreck’s portrayal of the vampire perhaps owed more to the tale of Coglin Grange than it did to the sleek and stately aristocrat of Stoker’s novel. Count Graf Orlock is an emaciated and withered figure, slightly stooped and bald and with protruding fangs and long, claw-like fingernails. Even so, the film borrowed liberally from the Dracula novel and therein lay its downfall. The producers and writer (generally credited as Albin Grau) had not obtained the permission of the Stoker estate, and Florence Stoker, (Bram Stoker’s widow), immediately instigated legal proceedings. A case of copyright infringement was found against Prana Film and Florence was awarded substantial damages. After making one film, the studio declared itself bankrupt. However, it had left behind what many consider to be an early masterpiece of cinematic horror.

From Alien to When a Stranger Calls, many films are based on folklore or employ an urban legend element to propel the narrative. But once…