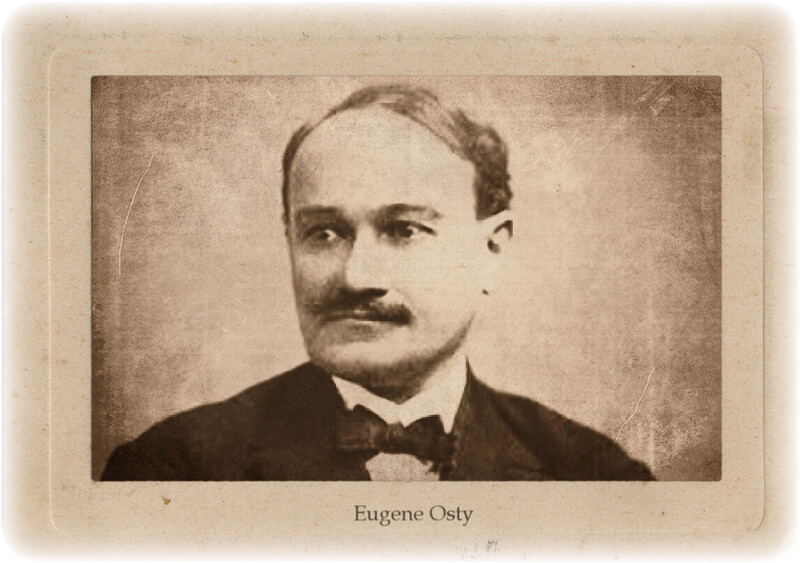 Eugene Osty (1874–1938) was a French physician and psychical researcher, for many years director of the Institut Metapsychique International (IMI) in Paris.

Eugene Osty was born on May 16, 1874. His father was a restaurateur, and later a farmer. He studied medicine, and, after obtaining his degree in 1901, established a practice in a small town in central France.

Osty first became interested in the psychic in 1909, when a palmist impressed him with her apparently accurate knowledge of subjects known to him but not to her. After an intensive study of palm reading, he became convinced that Clairvoyance was the operative function, and that the palm merely served to focus the mind. He began to divide his time between his medical practice and the study of professional sensitives, resulting in his book, Lucidité et Intuition (translated as Lucidity and Intuition in 1913). He began close collaboration with other European researchers, including Henri Bergson and Charles Richet.

After serving with the French Army Medical Corps in World War I, Osty published The Meaning of Human Life (1919), in which he linked the mental evolution of human beings with their psychic potentials. In 1921, he settled permanently in Paris, began to lecture on his work with psychics, and became a member of the governing committee of the IMI, which had been founded in 1918. An important book, Supernormal Faculties in Man, in which he summed up his thinking on clairvoyance and human nature, appeared in 1923. Following the death of Gustave Geley in an airplane crash in 1924, Osty took over as director of IMI. He was by this time well respected for his work on clairvoyance, and his appointment was hailed, even in the public press, as a brilliant move.

During his period at the IMI, which lasted until his own death in 1938, Osty took up the study of physical Mediumship. Innovative in his research methodology, he developed a technique of photography using ultraviolet light for use in the Séance room, and he devised a system of control involving an infrared beam, which if crossed would cause a battery of automatic cameras to take pictures. The idea was to catch any trickery in the act, but every time the beam was crossed and the cameras went off, the medium, Rudi Schneider (see Schneider Brothers), was hunched in his chair, in deep trance. At the same time, however, objects on the table or elsewhere in the room were displaced.

In this way, Osty was able to establish that some invisible emanation from the Medium was responsible for the movement of objects at a distance (see Psychokinesis [PK]). His 1930 experiments with Schneider are widely regarded as among the most important in psychical research history. They are reported in his book The Unknown Powers of Mind over Matter (1932), co-authored with his son, Marcel. Eugene Osty died on August 20, 1938, at the age of 64.

Metagnomy Metagnomy is a form of supernatural cognition, now generally referred to as “extrasensory perception” by parapsychologists. Etymology Derived from the Greek meta- ('beside') and…