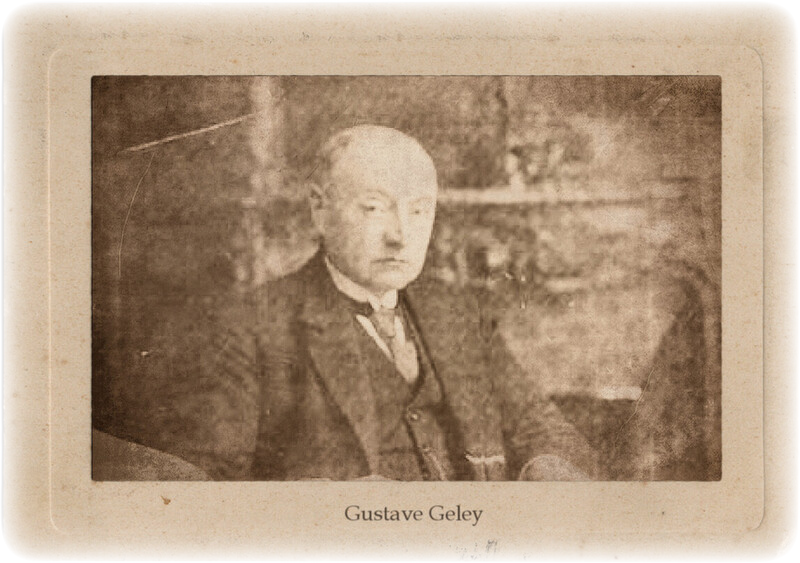 Gustave Geley was born in Montceau-les-Mines, France, in 1868. He became a physician, though he was interested in the unconscious and in psychical research. His first book was concerned with the origin of species. With his second book (L’être subconscient, 1899, untranslated), he took a stand against strict materialism, arguing for an interaction between the mind (or soul) and the physical body. In Geley’s “dynamo-psychism,” a dynamic power of the mental and spiritual realms is capable of directly affecting atoms of matter.

With the approach of World War I, the French materialization Medium Marthe Beraud(“Eva C.”) was cut off from her German investigator, Baron Albert von Schrenck-Notzing, and Geley took up the study of her mediumship. Between 1916 and 1918, he had twice-weekly sittings with Beraud at her home in Paris. When she arrived for a sitting, Beraud was undressed in his presence (as a doctor, he was allowed to see her unclothed), and then was literally sewn into a tight-fitting garment something like a body stocking. After she had entered a trance, she was led to a curtained cubicle that shielded her from the light in the room, and in which she sat during the Séance. Geley observed formations of Ectoplasm very similar to those reported by Schrenck-Notzing and others. He never saw full form Materializations, but he did watch hands or heads form out of the Ectoplasmic substance. Investigators would sometimes touch these formations, which would dissolve at their touch.

In his third book, From the Unconscious to the Conscious (1919; English translation, 1920), Geley reviewed a variety of data from psychical research and sought to develop further his idea of mind-body interaction. Unlike most of his colleagues in Psychical Research, Geley was a spiritualist at heart, and he accepted the reality of Reincarnation as well as the possibility of communication with the dead through mediums (see Survival After Death).

In 1918, when the French industrialist Jean Meyer gave money to establish the Institut Metapsychique International in Paris, Geley gave up his medical practice to become its director. Geley held additional sittings with Beraud at the IMI. Sittings with the Pole, “Franek Kluski,” began in 1920. Wax casts of limbs materialized by Kluski were successfully produced and placed on exhibit at the IMI. Geley studied another Polish materialization medium, Jan GUZIK, in Warsaw in 1921, and at the IMI in 1922 and 1923. He recorded his later work with Beraud and his work with Kluski and Guzik in Clairvoyance and Materialisation (1924; English translation, 1927).

Geley died in an airplane crash on his way back to Paris from Warsaw, where he had attended a sitting with Kluski, on July 15, 1924. He was 56.

Twenty-five years after his death, an article by R. Lambert suggesting that Geley had covered up evidence of fraud by Beraud appeared in the Journal of the Society for Psychical Research. In psychical research, the mere levying of a charge is often enough to condemn mediums and investigators, and Lambert’s communication has hung like a dark cloud over Geley’s reputation ever since. However, it constitutes the type of hearsay evidence that would be heavily discounted if it ran in favour of a medium’s ability, and a similar discounting would seem to be appropriate in this case.

Eugene Osty (1874–1938) was a French physician and psychical researcher, for many years director of the Institut Metapsychique International (IMI) in Paris. Eugene Osty was…

Baron Albert Phillbert Franz von Schrenck-Notzing, (1862–1929) was a pioneering German psychotherapist and psychical researcher, famous for his studies of physical Mediumship, which earned him…