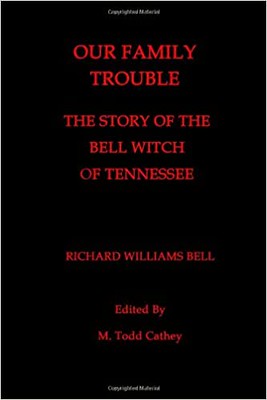 In the early 1800s John Bell moved his family from North Carolina to the rich bottom lands along the Red River in Robertson County, Tennessee. Bell, an elder in the Red River Baptist Church, was well-liked and respected by most in the community and prospered as a farmer. As Bell worked hard to raise his family and to carve out a living, the unusual, unexpected, and terrifying happened.

Between 1817 and 1821 the Bell family were allegedly tormented day and night by some heinous menacing spirit called a “witch” known as “Kate.” Kate’s remonstrations and activities were witnessed by many in the community. The events eventually led to the death of John Bell, and he is the only person whose demise is attributed to the work of a spirit. Written only seventy-three years after the awful events transpired, this is the story of the Bell Witch.

This is the eyewiteness account by a member of the Bell family.