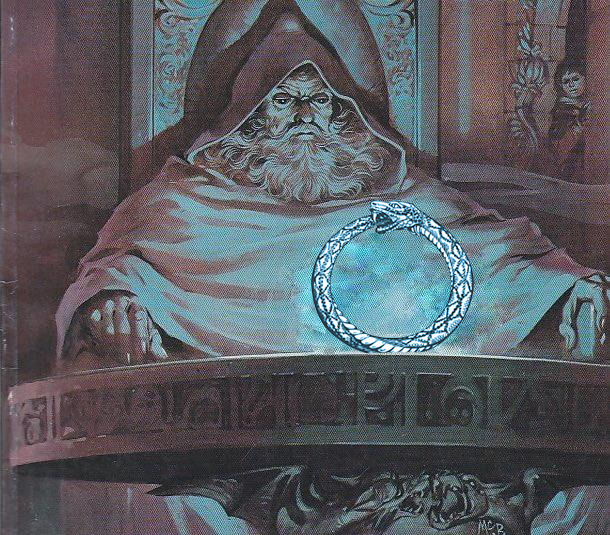 Ouroboros (uroboros) Ancient symbol of a Serpent biting its tail, forming a circle. The name ouroboros comes from the Greek terms oura, meaning “tail,” and boros, meaning “devourer.” The “tail-devourer” represents the eternal cycle of birth, death, and rebirth. The ouroboros is an important symbol in Alchemy and Magic.

ORIGINS OF THE OUROBOROS

The origins of the ouroboros can be traced to ancient Moon cults. The Moon served as timekeeper—especially of the eternal, cyclical nature of time—and fertilizer of life on Earth below. Because the Moon waxed and waned, it became a symbol of birth, death, and regeneration. Lunar deities were often associated with a devouring snake or dragon, which, after swallowing the Moon, became the mother of the Moon’s rebirth.

The ancient Egyptians depicted the goddess Buto as a cobra; in fact, the hieroglyph for goddess is a cobra. Buto protected ISIS and her son Horus, the sun god. Similarly, every individual in Egypt was protected by a personal snake spirit that symbolized their lifetime and their survival into the afterlife. In her form of the pharaoh’s crown, Buto was called the uraeus and was the symbol of the pharaoh’s power. She was most commonly depicted by the Egyptians as a serpent surrounding a solar disk. She was also depicted with the hieroglyph shen, a circle resting on a line that represents the Sun’s orbit and thus eternal life. Perhaps the first true Egyptian depiction of the ouroboros comes from the tomb of Seti I, in which a carving shows the sun god lying on his back in a house surrounded by an ouroboros. Such art was intended to ensure the immortality of the deceased. The third shrine of the sarcophagus of Tutankhamen shows the deceased in a stylized profile with one ouroboros encircling his head and another encircling his feet.

The oldest Greek creation myth, the Pelasgian, says that Eurynome, the goddess of all things, emerged from Chaos; the north wind created Ophion, the great serpent. Mating with Ophion, Eurynome then took the form of a dove and created the world EGG, which Ophion encircled seven times. The egg hatched all things in creation.

The Orphics (sixth and seventh centuries B.C.E.), who believed in Reincarnation, had variations of the Orphic egg myth. The Orphic cult, which strove to free the divine aspect of the soul that was imprisoned in the body, paved the way for Western mystery cults.

In classical times, the Greeks identified Chronos (Time) with the Earth-encircling river, Oceanos, that also encircled the universe in the form of a serpent with the zodiac on its back.

In the Hermetic philosophy that arose in Hellenistic Egypt, the ouroboros became a symbol of the underlying unity of spirit. The Gnostics, who believed the world to be at the center of the universe, believed that the ouroboros, or world serpent, marked the boundary between the world and the pleroma of heaven. Some Gnostics equated the world serpent with the evil demiurge (or Satan) who created the world and guards the gateway of escape. Gnostics equated the demiurge with the God of the Old Testament, the Alpha and Omega (the letter omega is similar in form to the Egyptian hieroglyph shen).

For the Naassenes and Ophite Gnostic sects, the ouroboros was equated with the serpent in the Garden of Eden. A hero rather than villain, the serpent helped Adam and Eve defy the demiurge Jehovah and obtain the first gnosis (knowledge) by eating the fruit from the Tree of Knowledge. Later, the serpent came to represent the guardian of the Tree of Life and therefore the gatekeeper to immortality.

In Roman mythology, the ouroboros was associated with Saturn, the god of time, who joined together the first and last months of the year like the serpent swallowing its tail. Saturn swallowed his children, and, with his scythe, symbolized the devouring of life or mortality.

In Renaissance Europe, Saturn continued to be associated with the ouroboros, and his scythe became the symbol of death. This association continued into more modern times, and the ouroboros came to decorate numerous Art Nouveau calendars.

THE OUROBOROS IN ALCHEMY AND MAGIC

In alchemy the fundamental message of the ouroboros is the changing of one thing into another, ultimately yielding “All is One.” It is a symbol for Mercurius and the union of opposites.

One of the oldest alchemical texts created in Hellenistic Egypt and included in the 11th-century Codex Marcianus, contains an image of the ouroboros. It symbolizes the underlying unity of the elusive Prima Materia, which exists in all matter and is simultaneously the beginning and goal of the Great Work. It is the Philosopher’s Stone, the vehicle for obtaining immortality, and it also represents the cyclical nature of the alchemical process, which is the union of the male and the female principles, their destruction, and their resurrection and reunification. The Codex Marcianus ouroboros is half black and half white, like the symbol for yin and yang in Taoism, thus depicting the sexual union of opposites that continually creates the world. Later alchemical imagery shows the ouroboros as two serpents devouring each other’s tails, heightening the sexual symbolism. Another representation is two dragons fighting at each other’s throats. The male and female principles are combined in their shared blood. An ancient Greek alchemical text says:

Here is the mystery. The serpent Ouroboros is the composition in which our Work is devoured and melted, dissolved and transformed. It becomes dark green from which the golden color derives. Its stomach and back are the color of saffron; its head is dark green, its four legs are the four imperfect metals [lead, copper, tin, and iron]; its three ears are the three sublimated vapors [sulphur, mercury, and salt ]. The One gives the Other its blood; and the One engenders the Other. Nature rejoices in nature; nature charms nature; nature triumphs over nature; and nature masters nature; and this is not from one nature opposing another, but through the one and the same nature, through the alchemical process, with great care and great effort.

On a higher level of the Great Work, the ouroboros represents the indistinguishable and eternal flow of sulphur and mercury into one another. The permanent fusion of the two creates the Philosopher’s Stone.

From alchemy, the ouroboros was absorbed into European magical and mystical philosophies of such groups as the ROSICRUCIANS and the Hermetic Order of the Golden Dawn. In dreams, the ouroboros often appears in variations such as the snake, the dragon, the egg, and the circle.