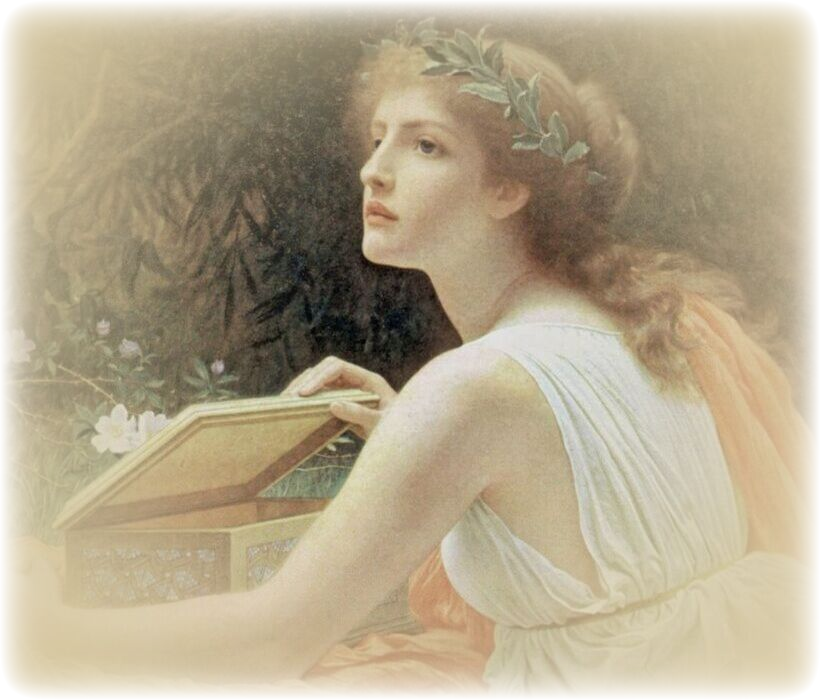 PANDORA : ALL GIVING; RICH IN GIFTS

Has any goddess ever been more defamed than Pandora? Hesiod’s version of her myth is so famous and familiar that the term Pandora’s box has entered the cultural vocabulary, but his account is a perversion of an earlier myth.

In the oldest version, Pandora emerged out of Earth as an avatar or emanation of Gaia, not from the workshop of the Olympian spirits. She brought gifts, not curses. Her gifts to humanity are botanical, including fruit, herbs for magical, healing, and culinary use and flax for clothing. Pandora is a plant goddess. She brought humanity another present, too: flint stones with which to make fire. Pandora taught people to make fire: they didn’t have to wait for lightning from the sky or another deity to steal it for them. Perhaps this fire was later hidden, necessitating Prometheus’ theft. According to Hesiod’s version, Pandora’s very existence is the result of that theft. Hesiod tells his story twice:

• In the mythic cycle, the Theogony, she is anonymous, only described as “beautiful evil.”

• In his Works and Days, Hesiod names her.

Zeus was angry at Prometheus for bringing fire to humanity. Having punished Prometheus, he decided to punish people, too. Pandora, described as the first woman, was the vehicle of punishment. The Olympic spirits collaborated on her creation: she is a joint production. Zeus sent her to Earth as a gift for Prometheus’ brother, Epimethius. Prometheus warned him not to accept any gifts from Zeus, but Pandora was too luscious to refuse. The deities had sent her to Earth with a closed box, telling her never to open it. She disobeyed, releasing every sort of disease and misery—the gifts that she is now credited with giving.

Pandora means “all gifts”: ask her for what you desire.

Hesiod calls Pandora the founder of the “deadly race and tribe of women.”

Anesidora: “The Sender Forth of Gifts”

Pandora is a beautiful woman wearing a golden crown decorated with images of land and marine creatures.

Pandora is a favourite subject of artists ancient and modern. She appears on the frieze at the base of Athena’s votive statue in the Parthenon. Greek vase paintings Demonstrate more generous, traditional images of Pandora: she emerges from Earth, arms upraised to greet her viewer. Modern artists inspired to create images of Pandora include John William Water-house, Jules Joseph Lefebvre, Henrietta Rae, and Dante Gabriel Rossetti.

Rhea The Great Mother; Mother of the Gods Rhea, Greek Earth Goddess, is an avatar of Gaia. Her name derives from an archaic word for…

Instead of looking up to the skies for the Creator, look underfoot. Gaia is Earth and Gaia is the Goddess. In the beginning, before anything…

Hephaestus is the divine smith, Lord of Subterranean Fire. He may be the son of Zeus and Hera or the son of Hera alone. One…

Dirt Woman stalks people’s dreams. She is primeval. She probably does not speak although she may make sounds. She probably means no harm, but she…