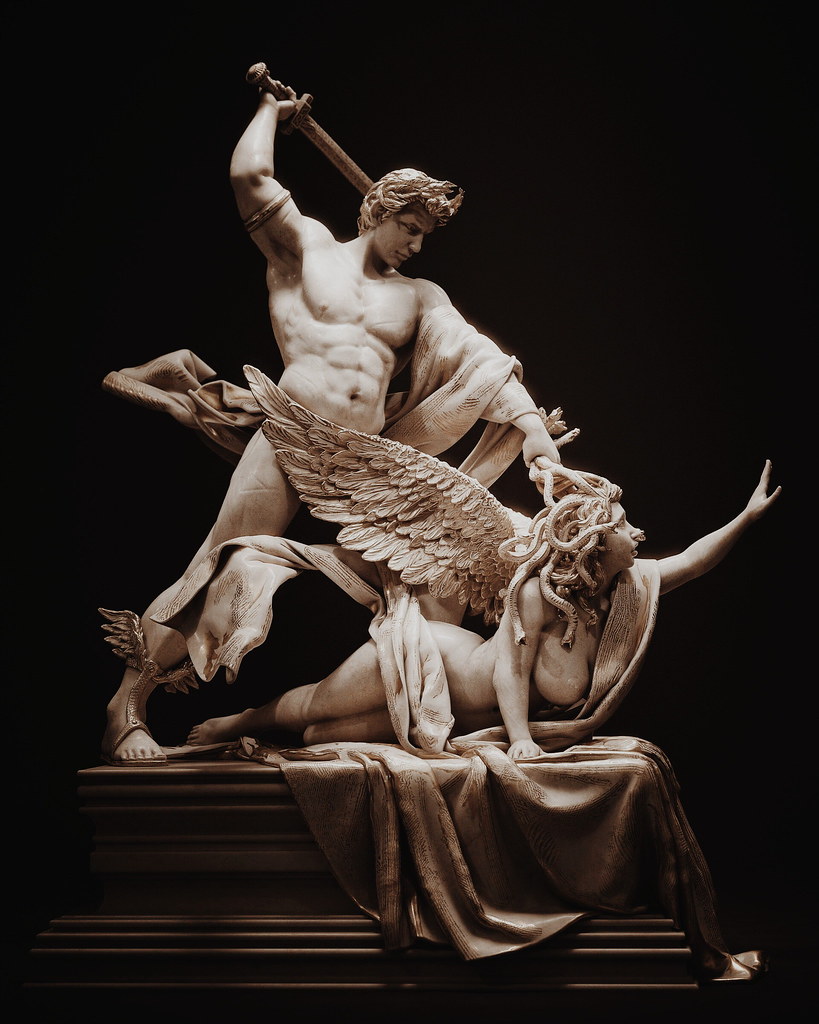 Perseus (destroyer) In Greek mythology, hero, son of Zeus and Danaë. When Perseus was a baby, his grandfather Acrisius was warned by an oracle that Perseus would kill him when he grew up. Fearful, he placed Danaë and Perseus in a wooden box and had them thrown into the sea. They were cast ashore and found by Dictys, a fisherman on the island of Seriphus. Dictys brought up Perseus and took care of Danaë. After some time, when Perseus was a young man, King Polydectes fell in love with Danaë and wanted to marry her. She refused, and Polydectes believed it was because of Perseus, so he sent him on a quest to retrieve the head of Medusa, the snake-haired Gorgon. Polydectes hoped Perseus would die in the quest. But Hermes, messenger of the gods, helped Perseus, and the hero returned with Medusa’s head. When the giant Atlas refused Perseus shelter, Perseus showed him the Gorgon’s head, and Atlas turned to stone. As he flew home on the winged sandals given him by Hermes, he saw Andromeda chained to a rock by the sea, waiting to be devoured by a sea monster. Perseus slew the monster from the air with one blow and then married Andromeda. At the wedding feast a former suitor of Andromeda appeared and wished to fight the hero. Perseus exposed Medusa’s head to him, and the suitor and all of the guests were turned to stone. Returning to his mother with his bride, he found Danaë had hidden herself from Polydectes’ sexual advances. Again he exposed Medusa’s head at a feast held by Polydectes and turned the king and his guests to stone. Perseus put Dictys on the throne and gave Medusa’s head to Athena for her shield, the Aegis. At Argos, while attending funeral games, Perseus accidentally killed his grandfather, Acrisius, fulfilling the oracle. He was killed by Megapenthes. Cellini’s Perseus and Antonio Canova’s statue Perseus with the Head of Medusa are among the best representations of the myth. Perseus’s myth is found in Apollodorus’s Bibliotheca (Library); Ovid’s Metamorphoses (book 4); William Morris’s “Doom of King Acrisius,” part of The Earthly Paradise; Charles Kinglsey’s Heroes; Nathaniel Hawthorne’s Wonder Book; as well as works by Tennyson, Browning, Hopkins, and Auden.

Danaë (laurel, bay) In Greek mythology, mother of the hero Perseus; daughter of King Acrisius of Argos and Eurydice; sister of Evarete. Acrisius had been…

Acrisius (lacking judgment) In Greek mythology, king of Argos, son of Abas and Aglaia; great-grandson of Danaus; and brother of Proteus. After an oracle told…

Cassiopea (Cassipea, Cassiope, Cassiopeia) (cassia juice) In Greek mythology, the wife of Cepheus, king of Ethiopia; mother of Andromeda and of Atymnius by Zeus. Cassiopea…

ANDROMEDA AND THE MONSTER BY JUAN ANTONIO FRIAS Y ESCALANTE Andromeda (ruler of men) In Greek mythology, heroine saved by Perseus; daughter of the Ethiopian…

Pegasus (of the springs) In Greek mythology, a winged horse who sprang from the blood of the slain Gorgon Medusa when her head was cut…