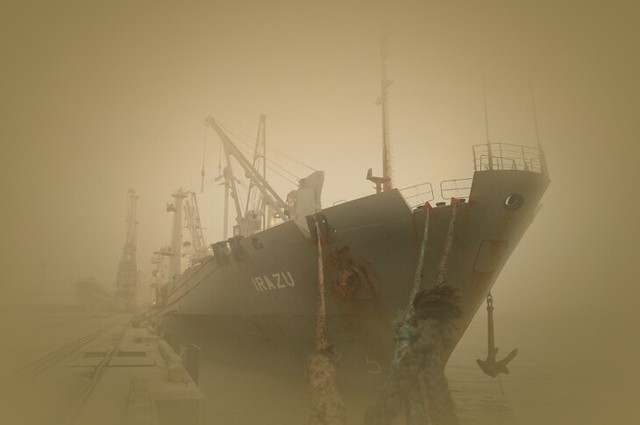 Numerous phantom ship stories come from the British Isles; ghost ships continue to be reported in modern times, especially off the Atlantic Coast.

The S.S. Violet, a paddle steamer, ran aground crossing the English Channel in a snowstorm more than 100 years ago. Everyone on board was killed. Curiously, the ghostly wreck was reenacted at the start of World War II, and was witnessed by the lookout at the East Goodwin lighthouse. A lifeboat was sent out to investigate, but nothing was found.

On the Atlantic coast, mysterious tall-masted sailing ships are seen floating offshore before they vanish into the mist. Many are unknown. According to one Cornwall legend, a ship was seen one moonlit night sailing straight for shore between Land’s End and Penzance. Just as it seemed the ship would wreck itself, it lifted out of the water, sailed through the air over land and vanished.

The Cape of Good Hope, the treacherous southernmost tip of South America, is another oft-haunted site. (See also Flying Dutchman.)

Pirates, who plied the seas in the 17th and 18th centuries, are associated with phantom ship lore. In American lore, the ghost ship of Captain Kidd is said to sail up and down the New England coast as Kidd searches for his buried treasure. Pirate Jean Lafitte’s ship is said to prowl the waters off Galveston, Texas, which is thought to be the area where his ship went down in the 1820s.

The most haunted waterways of America are the Great Lakes, which have claimed numerous ships during violent winter storms. The Great Lakes are more dangerous than any ocean to navigate because of fast-rising, powerful storms that can sink a ship in minutes.

One of the most famous lost ships of the Great Lakes is the Griffon, built at Niagara, New York and owned by the French explorer Rene Robert Cavalier, Sieur de La Salle. The Griffon, at 60 feet in length and 45 tons in weight, was the largest ship built to sail the lakes in her time. During construction, the workers were taunted by local Iroquois, who considered the ship an affront to the Great Spirit. The Iroquois prophet, Metiomek, cursed the ship and said it would sink. The Griffon commenced her maiden voyage on August 7, 1679. At Detroit Harbor at Washington Island, Wisconsin, La Salle loaded fur and then left the ship to continue his own explorations for the source of the Mississippi River by canoe. The Griffon set out to return to Niagara on September 18, 1679. It never arrived. No one knows what happened to it; according to legend, it “sailed through a crack in the ice” and vanished. In 1900, a wreck believed to be that of the Griffon was discovered off Bruce Peninsula in Lake Huron. The identity of the wreck was announced in 1955 after historical evidence had been examined; however, others have disputed the claim, and the true identity of the wreck remains unconfirmed. Meanwhile, the ghost of the Griffon reportedly is still seen drifting about Lake Huron on some foggy nights.

An unusual phantom ship appeared at New Haven, Connecticut in 1648, wrecking itself before a crowd of astonished witnesses. It was interpreted as a sign from God revealing the fate of a ship that had disappeared.

The event was recorded in Cotton Mather’s ecclesiastical history of New England, Magnalia Christi Americana, as reported to him in a letter by the pastor of New Haven at the time, James Pierpont. According to the story, the merchants of New Haven, former Londoners, found themselves on hard times. They pooled the last of their resources to build a ship to send to England with goods. The ship was built in 1647 in Rhode Island. The master, a Mr. Lamberton, perhaps with a bit of prescience, commented that the ship would prove to be their grave. The ship set sail in January, bearing about five or six of New Haven’s most prominent citizens among the passengers. It never reached England and presumably was lost at sea. For months, the citizens of New Haven anguished over the fate of the ship, and prayed for the souls aboard.

In June of the following year, a violent thunderstorm came out of the northwest one afternoon. The sky then grew calm. About one hour before sunset, Pierpont told Mather:

. . . a ship of like dimensions with the aforesaid, with her canvas and colours abroad (though the wind northerly) appeared in the air coming from our harbor’s mouth, which lyes southward from the town, seemingly with her sails filled under a fresh gale, holding her course north, and continuing under observation, sailing against the wind for the space of half an hour. Many were drawn to behold this great work of God; yea, the very children cryed out, ‘There’s a brave ship!’ At length, crowding up as far as there is usually water suffi cient for such a vessel, and so near some if the spectators, as that they imagined a man might hurl a stone on board her, her main-top [Pierpont’s emphasis] seemed to be blown off, but left hanging in the shrouds; then her mizzen-top;

then all her masting seemed blown away by the board: quickly after the hulk brought unto a careen, she overset, and so vanished into a smoaky cloud, which in some time dissipated, leaving, as everywhere else, a clear air. The admiring spectators could distinguish the several colors of each part, the principal rigging, and such proportions, as caused not only the generality of persons to say, ‘This was the mould of their ship, and this was her tragick end,’ but Mr. Davenport [an official or preacher] also in publick declared to this effect, ‘That God had condescended, for the quieting of their afflicted spirits, this extraordinary account of his sovereign disposal of those for whom so many fervent prayers were made continually.’

A funayuhrei is in Japanese folklore, a Ghost ship that travels silently at night or in thick fog. It appears suddenly without sound or lights.…

Phantom ships are reputed to haunt the Solway Firth. Elliott O’Donnell, writing in 1954 of ‘nasty sea ghosts’, says: One such story is of a…

Ship of the Dead A universal motif in mythology that is a means by which the SOULS of the dead leave earth for the afterworld.…

The Palatine light is a phantom ship, seen off Block Island, Rhode Island, in the North Atlantic waters. The story of the Palatine, like many…