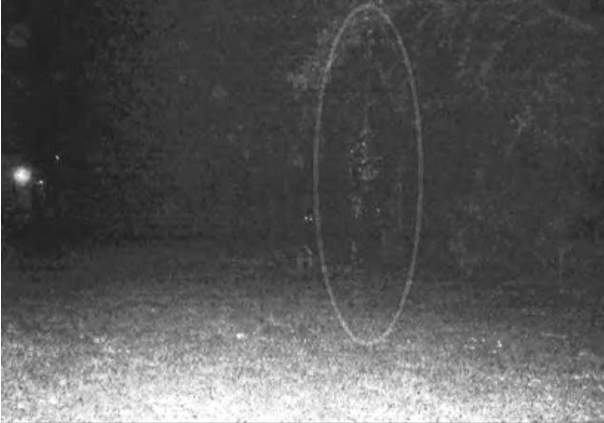 This image was taken at Pilgrims Rest Cemetery in Ormond Beach, Florida. After doing background research, the Daytona Beach Paranormal Research Group, Inc. (DBPRG) came to find out that an AfricanAmerican man was hanged in the tree in the back corner of the cemetery for “crimes” he allegedly committed. He was hanged by the neck in this spot before the land was opened as an actual cemetery.

After his death, it was discovered that he was not the man that committed the crime of which he was accused. It is believed, by some, that one of the most elusive phenomena to photograph in the spirit realm is the spirit of an African-American.

This photo was taken with a Pentax IQ Zoom 35mm camera, using Kodak 800- speed film. The original photo was scanned into the computer, resized, and the final photo was cropped out and enlarged. No other enhancements were made to this photo. The spot at which this photo was taken is also notorious for having frequent “hot spots.” DBPRG members have recorded temperature fluctuations that increase by 20 to 40 degrees on numerous occasions.

Several small animals, such as birds and squirrels, have been found dead in this exact location, and strange mists have been photographed in this area as well.

Back to Haunted Florida