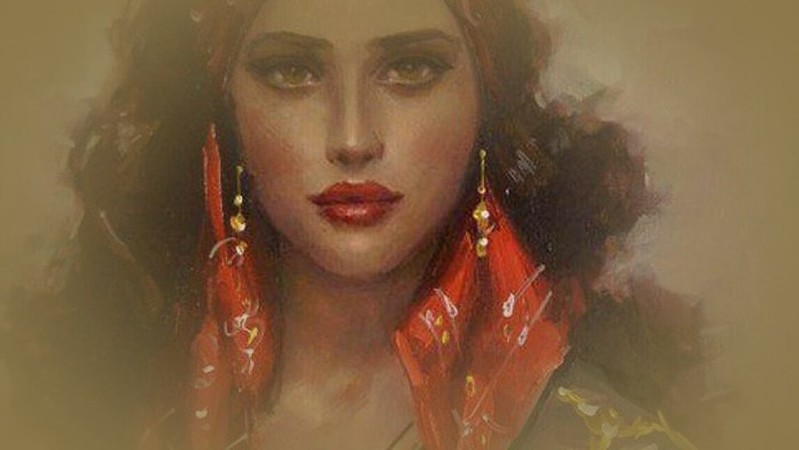 • Some considerer her a whore, slut, prostitute, or devil-woman.

• For others she is a goddess of love, sex, success, and abundance.

Pomba Gira is the scarlet woman, the sacred harlot, and the lady of crossroads and street lights. An Afro-Brazilian spirit, Pomba Gira derives from the intersection of Iberian, Gitano, and Central African roots. Pomba Gira is the crossroad where these traditions meet. She is a goddess of power, eroticism, death, and vengeance. She has dominion over sex for pleasure and power, not procreation. (That said, she can bestow fertility when and if she desires.) Pomba Gira is an oracular spirit who can reveal the past and future, but she can be a brutally plain-spoken truth-teller. Don’t ask her for information unless you are ready to hear unvarnished truths.

Pomba Gira’s origins are mysterious. She is not worshipped in African traditions, only in Brazil. (It is possible that devotees did not survive elsewhere.(See Also:Ochossi.) Pomba Gira is sometimes translated as “whirling dove,” which is not inappropriate as many Pomba Giras love to dance, but the name really derives from the Kikongo Mpamba Nzila or “crossroad.”

Sometimes when people refer to Pomba Gira they really mean Maria Padilha (or vice versa). The names are frequently used interchangeably but there are many Pomba Giras. These may be multiple paths of one goddess or Pomba Gira may name an entire category of spirits. (See Also:
Ezili; Mami Waters; Simbi.)

Maria Padilha may be the Queen Pomba Gira. It’s possible that at least some of the other Pomba Giras are vestiges of the Fairy court of beautiful female spirits who serve as the entourage for Spain’s Maria de Padilla. They may have accompanied their queen on her sea voyage to Brazil. As she transformed into Maria Padilha, so they too transformed into Pomba Giras. (See Also:
Padilha, Maria; Padilla, Maria de.)

The names Pomba Gira and Exua are also sometimes used interchangeably. As Exua, Pomba Gira is identified as the wife of Exu, the Brazilian path of Eshu Elegbara.

• Pomba Gira Queen of the Crossroads

• Pomba Gira of the Souls

• Pomba Gira Queen of Calunga (Queen of the Sea)

Pomba Gira is an ally of women. She bestows fertility but is also invoked to cause a miscarriage when pregnancy is inconvenient or disastrous.

Manifestation depends on which Pomba Gira appears or is invoked. Most dress in red (if they’re dressed at all). Pomba Gira sometimes manifests as a drag queen.

Again this depends upon the path, but she may be depicted as a red she-devil complete with pitchfork, horns, and cloven hoof or as a beautiful, scantily clad woman.

Pomba Gira haunts crossroads, street corners, and nightclubs. Some paths of Pomba Gira display fondness for seashores and cemeteries, too.

In the sixteenth century, Portugal was the first nation to deport Gypsies (Roma), first to its colonies in Africa and then to Brazil. Maria de…

The West African trickster spirit Eshu Elegbara is Master of Roads. He determines whether someone’s path is clear or blocked with obstacles. Eshu determines how…

Calunga Mother of the Waters ALSO KNOWN AS: Kalunga ORIGIN: Congolese; Bantu Calunga is a Congolese spirit of death and the sea. The word Calunga…

Ragana rules over night, winter, birth, death, destruction, rebirth, and regeneration. She is a goddess of fertility, abundance, and menopause, which begins with the touch of her red wand.