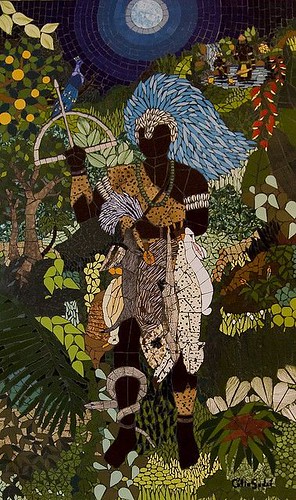 Ochossi is Orisha of the Hunt, but like that other hunting deity, Artemis, he is so much more. Ochossi’s hunting skills indicate his ability to provide for his devotees. Hunting is also interpreted metaphorically. Ochossi is a sentinel, warrior, guardian, and law enforcement officer. As a spirit of justice, he hunts down malefactors.

Ochossi’s name derives from a root word for secret. Some translate his name as “Left-Handed Sorcerer.” He is a great magician who knows everything about the powers of the forest and botanical power in general. Ochossi makes deadly arrow poison and its antidote. He is a master healer, when he chooses to be. Ochossi’s arrows never miss their mark.

Ochossi lives in the forest with his brothers Elegba and Ogun, the divine ironworker who forges and blesses his tools. (Yoruba arrows traditionally have iron heads. 19th century British explorers described Yoruba archers as Africa’s finest.) Together they are the hard-working magician-spirits classified as Santeria’s Warriors. Sometimes Logunedé lives with them, too.

Most Orishas are envisioned as Africans; Ochossi often manifests as a Native American hunter. Because anthropologists were unable to locate branches of his tradition in Nigeria, many assumed incorrectly that Ochossi was an Indian addition to the pantheon. Some Umbandistas consider Oxossi to be exclusively a Caboclo, not African.

Ketu, the Yoruba kingdom where Ochossi was first venerated, was totally decimated by the slave trade. His tradition is not found in Africa because it did not survive, not because it didn’t exist. Ochossi’s priests were enslaved and transported: his tradition ultimately only survived in the West. Ochossi is patron of the Maroons, escaped slaves who created communities in remote, heavily wooded areas.

Ochossi is Obatala’s scout and spyboy; his chief of surveillance. Ochossi owns prisons, places where people are caught and trapped. He has dominion over confinement, especially solitary. He is petitioned to liberate from prison and to prevent imprisonment. As a spirit of justice, he may be invoked to capture and imprison someone, too.

Those who fear incarceration may invite Ochossi’s presence with an altar dedicated to him: invite him to please live in your house so that you don’t have to live in his (i.e. jail).

• He is the patron of Rio de Janeiro.

Ochossi may manifest as a traditional African or Native American hunter. He may also appear in modern dress, but there will be some sort of clue as to his true identity: a necklace of teeth or bow-and-arrow cufflinks, for instance.

Considering he is a solitary hunter, he has many allies: Ogun, Osain, Obatala, Eshu Elegbara, Erinle, Oshun, Logunedé, Jurema

Depending on tradition, Monday, Tuesday, Wednesday, or Thursday, as well as the fourth day of each month.

Usually brown and lilac, but different traditions associate him with other colors, including blue, green, teal, yellow, or red.

Brambles and other thorny, spiky thickets

Offerings for Ochossi are traditionally left at the thresholds (doors or gates) of police stations, prisons, or any other building perceived as a house of incarceration, but make sure that this action does not contribute to arrest, capture, or incarceration. (The goal of working with spirits is to improve your life, not increase your problems.)

Decorate with antlers, horns, feathers, and animal print fabrics. Antlers may be wrapped in silk. Offerings are sometimes placed on a cloth or mat on the floor.

Ochossi has simple taste: he likes roasted peanuts, trail mix, honey, jerky, and corn cooked with coconut. Stir honey and cornmeal into a glass of milk for him; offer anisette or cachaça plus tobacco products, handcuffs, manacles, traps, or bows and arrows. A lavish gift is a ritual bow and arrow made of brass or fine metal.

Eshu-Ellegua Elegbarra: Santeria and the Orisha of the Crossroads – Raul Cañizares
Santeria: Correcting the Myths and Uncovering the Realities of a Growing Religion – Mary Ann Clark
The Santeria Experience -Migene Gonzalez-Wippler
Santeria: the Religion: Faith, Rites, Magic – Migene González-Wippler
Osogbo: Speaking to the Spirits of Misfortune – Ócha’ni Lele
Prayers to the Orishas
Exu, Divine Trickster and Master Magician – Denise Alvarado
Diloggún tales of the natural world – Santería stories – Ócha’ni Lele
The Secrets of Afro-Cuban Divination: How to Cast the Diloggún, the Oracle of the Orishas – Ócha’ni Lele
Santeria: The Beliefs and Rituals of a Growing Religion in America – Miguel A. De La Torre
Categories: Orishas

Logunedé, primarily venerated in Brazil, is the child of Oxum Iponda, a forest dwelling path of Oshun and either Erinle or Oxossi. Logunedé spends half…

Orunmila : The Sky Knows Who Will Prosper Orunmila is the sacred diviner. He is the master of Ifa, a complex, sacred system of divination.…

Jurema names a plant, an herbal potion, a spirit and a spiritual tradition: The Jurema is a sacred evergreen whose bark and roots are used…