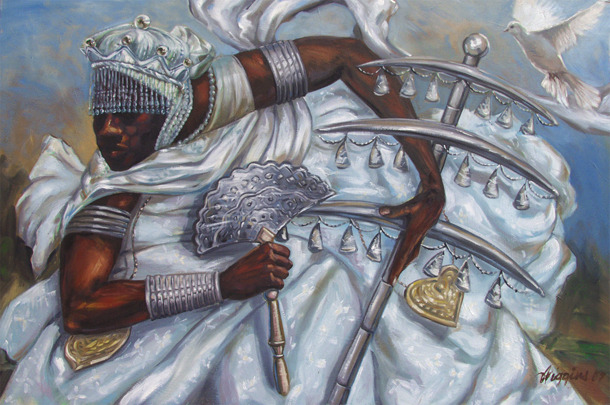 Obatala : King of the White Cloth

Obatala, orisha of creation and healing, is the calm, cool spirit of serenity—a peacemaker and lawgiver. Obatala is the Just Judge, a spirit of righteous kindness and justice. He is gentle, wise, and incredibly patient.

Obatala was entrusted with crafting human bodies. The Supreme Creator breathes life into the forms Obatala crafts. The central tragedy of Obatala’s myth is that once, having drunk too much palm wine, Obatala either became careless or overly creative. He began crafting images that did not exactly correspond to the blueprint the Creator gave him. Obatala invented blindness and various birth defects.

In consequence, Obatala’s priests and devotees never drink palm wine. Obatala is responsible for the well-being of those considered his children: albinos, the blind, lame, or mute, and those possessing anything classified as a birth defect, whether visible or not.

Obatala is present in cool, white substances. Obatala owns everything white, including bones. The following contains his essence:

• Cascarilla powder (powdered white eggshell for magical and ritual use)

Obatala encourages his devotees to maintain their cool, just like he does. He favours those who are calm and collected, or at least striving to be. Bad tempers, rude outbursts, impatience, and unpleasant attitudes tend to distance him. (He won’t do anything mean to you; he’ll just stay away.) Obatala is invoked to help with anger and rage management by those who are sincere. (He’ll know.) Obatala is also invoked to calm tempers and situations so that clear-headed judgments may be formed or obtained.

• Obatala is invoked for favourable legal judgments and help with legal matters.

• Ask him to encourage others (like judges) to consider you with mercy and compassion.

• He is invoked to calm those who are angry with you, especially dangerous people.

• Obatala is syncretized to Jesus Christ.

Obatala is usually envisioned as an androgynous being with long white hair, wearing pure white garments.

Obatala lives atop mountain peaks, especially those always dusted with white snow. Offerings may be delivered to him there.

Obatala drinks water, milk, and coconut milk. Do not give him palm wine. He accepts white rice, coconuts, bananas, white bread, white cornbread, white sugar, and white flowers. Extravagant offerings include charms or jewelry crafted from some of his more expensive metals.

Obatalá is an Osha head in the Yoruba pantheon that rules over all heads.

He is usually invoked to avoid problems in life, even with the other Orishas, ​​because his deity emanates peace, calm and patience, his energy solves conflicts.

Obatalá is the creator of the Earth, owner of intelligence, thoughts, human dreams and everything white.

As such, Obatala was sent to Earth by Olofin, a deity who would be the equivalent of Jesus Christ in syncretism, to rule the world, do good and take care of order, peace and harmony among men.

Obatalá is the only Orisha who can keep the head of an aleyo (initiated in the Yoruba religion) when there is a dispute between two Orishas for the same omo (son).

It is one of the main Orishas of the Yoruba religion, it represents purity, patience and whiteness.

It was Obatalá who created our Heads. Do you know the History?

The Yoruba stories tell that when Oloddumare the Supreme God sent Obatala and Oduduwa To create the world we live in, Obatalá fell asleep and Oduduwá left him no homework to do, taking all the credits for the work.

When Obatalá complained to Oloddumare, he gave him the task of creating the heads of the people, since during their creation they had been left unfinished.

And as before Obatala’s work, human beings had no head, they were very clumsy and did not live well.

After Obatala created the human heads, the world began to function more optimally and fluidly.

As Obatalá is the owner of all human heads, he is also the owner and creator of everything we have in our lerí (head) such as thoughts, dreams, our mind in general.

How is Obatala represented in the Rule of Osha?

According to each path of Obatalá there are different characteristics and attributes of the orisha. But when Obatalá comes down to earth, he usually does it with very slow steps, imitating an older person.

The personality of the children of Obatala It varies as much as the path of each Orisha, because in their paths you can appreciate how diverse their avatars can be.

Obatalá is also reflected as an old man who personifies wisdom, humanity and humility, presents himself with a cane and shows great patience to solve the problems that his children have, bringing harmony.

Obatalá’s favourite offerings (adimú) are all those in which the colour white predominates, therefore, they can be placed:

Desserts like rice pudding
foods like milk, bread pudding, cocoa butter
fruits, including soursop, coconut, and yam.
La cascarillaIt is also an element that represents the purity of Obatala and is widely used in their offerings.
It should be noted that Obatalá has a taboo with salt, so it is recommended that none of its offerings be seasoned with salt.

At the end of the article we leave some of their offerings and how to do them step by step.

What is the Mark of Obatalá?

In Santeria, Obatalá is represented by the number 8 and its multiples. For this reason, many of his offerings are given to him in quantities of eight.

His brand is also reflected on the Obatalá necklace. The eleke (necklace), which is mostly white beads with crystal or transparent details, should be placed in multiples of 8.

Among the five foundation necklaces that the religious receives in the Rule of Osha or Santeria, which represent the five main Orishas of the Yoruba pantheon, is the Obatalá necklace, along with that of Elegguá, Oshún, Yemayá and Shangó.

What saint is Obatala in the Catholic Religion?

Obatalá is the orisha who is syncretized with the Virgen de las Mercedes, a saint who is also represented through the colour white and virtues such as peace, justice and tranquillity.

BOOKS IN OUR LIBRARY:

Exu, Divine Trickster and Master Magician – Denise Alvarado
Santeria: the Religion: Faith, Rites, Magic – Migene González-Wippler
Diloggún tales of the natural world – Santería stories – Ócha’ni Lele
Osogbo: Speaking to the Spirits of Misfortune – Ócha’ni Lele
Eshu-Ellegua Elegbarra: Santeria and the Orisha of the Crossroads – Raul Cañizares
Santeria: The Beliefs and Rituals of a Growing Religion in America – Miguel A. De La Torre
Santeria: Correcting the Myths and Uncovering the Realities of a Growing Religion – Mary Ann Clark
The Secrets of Afro-Cuban Divination: How to Cast the Diloggún, the Oracle of the Orishas – Ócha’ni Lele
The Santeria Experience -Migene Gonzalez-Wippler
Mysteries and Secrets of Voodoo, Santeria and Obeah – Lionel and Patricia Fanthorpe
Categories: Orishas

Oxala CLASSIFICATION: Orisha Oxala (pronounced oh-shala) is a Brazilian corruption of the Yoruba Orisha-Nla, another name for Obatala. Oxala and Obatala are the same deity,…

Ochossi is Orisha of the Hunt, but like that other hunting deity, Artemis, he is so much more. Ochossi’s hunting skills indicate his ability to…

Thoth : Lord of Divine Words; Lord of Books Thoth is primeval: he is from before Creation. In some Egyptian myths, Thoth is the supreme…

White Lady (2) White Lady is also the name given to a species of European forest spirit, the equivalent of Fairies. In non-Celtic parts of…