OSHUN : GREAT QUEEN; DAUGHTER OF THE MOUNTAIN; LADY OF WATERFALLS; MOTHER OF THE WATERS 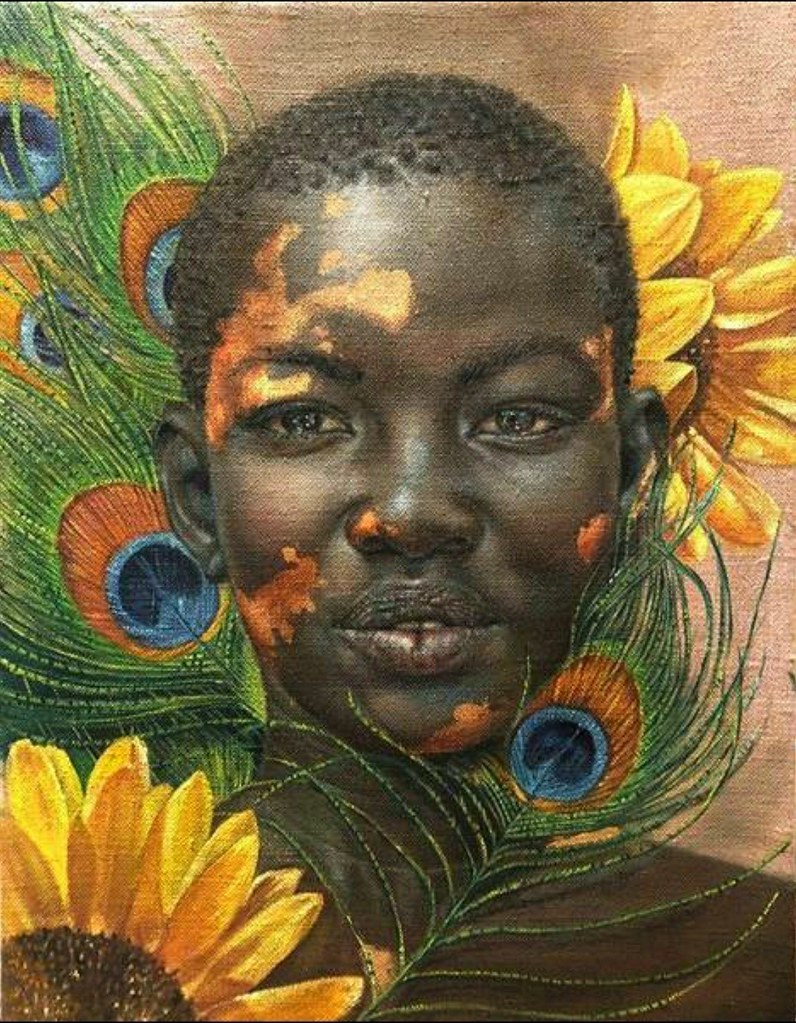 Oshun, Spirit of Sweet Water, is the embodiment of love and romance, wealth, beauty, abundance, and magical knowledge. Oshun has dominion over things that flow: water, honey, love, money, mother’s milk, and so forth.

Her power extends over various parts of the human anatomy, particularly the reproductive organs. Oshun is petitioned for personal fertility and to heal reproductive disorders. She fulfills devotees’ wishes, providing wealth, employment, love, beauty, and protection. Oshun is a powerful witch and an expert at divination.

Oshun may be Yemaya’s daughter or sister. They are extremely compatible and are venerated together. Oshun and Oya do not get along. Although one devotee may venerate both of these powerful, beautiful, warrior orishas, keep some space, time, and distance between them. Do not bring them close together unless you wish to see sparks fly. Oshun has been married to Orunmila, Shango, and Erinle and has had love affairs with Ochossi, Ogun, and Elegba.

Oshun is the youngest, sweetest, and smallest orisha, but she may be the toughest:

• When Ogun was depressed and sulking in the forest, who was the only orisha capable of lifting his spirits and bringing him back to civilization? Oshun.

• When the Islamic jihad threatened Yorubaland, which orisha stopped the warriors in their tracks and sent them back home? Oshun.

• When the orishas needed to get in touch with the remote Supreme Creator, who was the only orisha capable of flying to Heaven? Oshun in her guise as a vulture.

A spirit of incredible generosity, Oshun is very slow to anger. However, once angered she is reputedly the most dangerous of all orishas and extremely difficult to appease. If you make her a promise and do not keep it, expect her to take back whatever she has given.

Oshun’s shrine in Oshogbo, Nigeria, is now designated a UNESCO World Heritage site. The town is under Oshun’s protection; the Islamic jihad was halted right outside its walls. A complex of shrines was erected in the forest with the central one dedicated to Oshun. Pilgrims travel from around the world to visit, especially during the annual Oshun festival held in August, typically lasting nine days. Sacrifices and requests are made, particularly regarding fertility. It is also traditional for mothers to attend the festival accompanied by their nursing babies as a gesture of gratitude toward Oshun. Women are welcome at the shrine throughout the year to immerse themselves for a fertility boost.

If you petition Oshun for children, then eating pumpkins and yellow squash in any form, including the seeds is taboo for you. Many devotees refrain from these foods, anyway, just from respect, even if nothing is asked of her.

In Cuba, Oshun is syncretized to La Caridad del Cobre, “Our Lady of Charity”; in Brazil, she is identified with Catherine of Alexandria.

She most commonly manifests as a breathtakingly beautiful woman, usually dressed in yellow or gold. She may manifest as a mermaid. She wears five brass bracelets and may carry or wear a mirror at her belt, the better to be able to stop and admire herself whenever she wishes. Oshun is manifest in honey and in cinnamon.

A pot of river water, representing her gift of healing magic

The spectrum of yellow, gold, and orange

Oshun is traditionally associated with brass and copper but she now claims dominion over gold, too, as it is perceived as more valuable and prestigious.

The bedroom and near fresh, flowing water such as rivers, streams, and waterfalls. She likes the kitchen and is a master chef. Offerings, spells, and supplications are most effective if performed in these places. For maximum effect, perform rituals or petitions for Oshun near a river or stream under a full moon.

• The shrine of Our Lady of Caridad de Cobre in Miami, Florida

Anything having to do with feminine beauty: makeup, mirrors, brushes, perfume, and so forth. She accepts flowers, and fans made from peacock feathers or yellow sandalwood. She drinks chamomile tea. Her favourite cooked dish is spinach with shrimp. Her very favourite offering is honey. You must taste any honey that you offer Oshun, each and every time you offer it, not just upon opening the jar. An attempt was once made to poison her through an offering of honey. All offerings of untasted honey will be rejected, and you may be looked upon with suspicion. Oshun likes yellow and orange fruits and vegetables.

Peel a beautiful orange for Oshun. Slice or divide it into five portions. Drizzle it with cinnamon honey or first drizzle with honey and then sprinkle with ground cinnamon. Remember: taste the honey! Serve to Oshun.

Ajé-Shaluga   CLASSIFICATION: Orisha Ajé-Shaluga, orisha of wealth, trade, and cash, may manifest in male or female form. In Nigeria, Ajé-Shaluga is generally, although not…

Logunedé, primarily venerated in Brazil, is the child of Oxum Iponda, a forest dwelling path of Oshun and either Erinle or Oxossi. Logunedé spends half…

The Yoruba people who live in what is now modern Nigeria have the highest rate of multiple births on Earth. The Ibeji are the sacred…