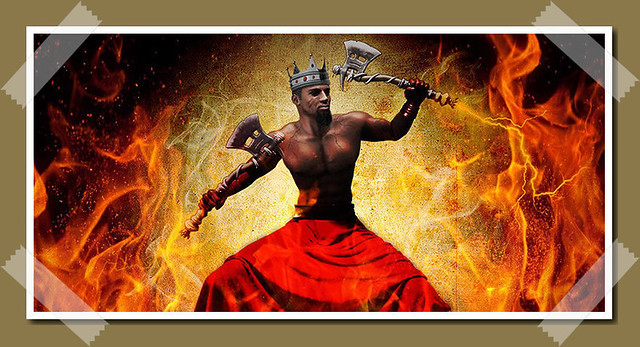 Shango is the immensely powerful Lord of Thunder, Lightning, and Fire. Lover boy supreme, Shango epitomizes virility, male beauty, and procreative energy. Petition him to share a little of his essence: he provides fertility, luck in love, and male sexual prowess. Shango is invoked for courage and justice. In Yoruba cosmology, lightning is understood as an instrument of divine justice, retribution, and protection. As the wielder of lightning, Shango provides victory over enemies and protects from all evil. Shango breaks hexes, curses, and evil spells.

Shango exults in warfare, competitive sports, martial arts, and dancing. He is a ladies’ man and a musician. Legend has it that he created the very first set of bata drums. Shango is proud, temperamental, volatile, a womanizer, amazingly generous, compassionate, and tireless on behalf of those he loves.

Shango is among the most beloved of all or-ishas. Two distinct African Diaspora religions bear his name: Trinidad’s Shango, and Xango of Recife, Brazil. In the Brazilian spiritual tradition, Umbanda, Xango (Brazilian spelling) leads the second of Seven Lines. The exception is Haiti where Shango plays second fiddle to his great rival, Ogun.

Shango’s consorts include Oba, Oshun, and Oya. Yemaya may or may not be his mother. He has a tense relationship with Ogun. Some, although not all, traditions consider them to be mortal enemies: it is usually considered advisable to keep some distance between these two alpha male spirits. (They are, however, invoked together as members of the Seven African Powers.)

The orisha Shango has had at least one human incarnation. The historical Shango was the fifteenth-century fourth king of Oyo, now part of eastern Nigeria. Depending on the version of the myth, the king was an avatar of the preexisting orisha or Shango became an orisha after the king’s tragic death.

The Nigerian government placed a statue of Shango at Kainji Dam to celebrate the power lines.

King Shango, a master of psychological warfare, was a beloved military commander. He was also a magical adept who had access to powers of fire and lightning. There are different versions of how his reign and life ended. His associations with magic may have cost him his throne: exiled by the elders of Oyo, friends, and sycophants alike deserted him. When even Oya, his most faithful supporter, doubted him, he killed himself. Alternatively, while experimenting with the powers of lightning, Shango accidentally burned down his palace with all his wives and children inside. Grief stricken, he killed himself, sometimes as a double-suicide with Oya (who may have provided the firepower).

In Africa, Shango once disguised himself as Oya to escape his enemies. In Cuba, Shango disguised himself as Saint Barbara in order to make himself accessible to his devotees and preserve his power. Shango is syncretized to the virgin martyr, with whom he shares associations with lightning. (To confuse matters more, Oya sometimes wears the mask of Saint Barbara as well.) Shango is also syncretized to Saint Jerome as well as to John the Baptist in some Haitian traditions.

• Shango is associated with the Afro-Brazilian spiritual-martial art, Capoeira.

• Place thunderstones or Neolithic axes on Shango’s altars to activate them.

Chango; Xango; Oba Koso (“The King Does Not Hang”)

Dancers, drummers, twins. Shango is patron of Trinidad and Tobago.

Red and white—in Yoruba cosmology, this indicates the balance between aggression and compassion, respectively.

Wednesday, Friday, or Saturday depending upon the tradition

Those made during a thunderstorm are most effective.

His special place in the home is the fireplace or hearth.

Shango likes his food spicy and his portions large. Offer red foods, like red apples and red palm oil. His favourite meals include yams, corn, and peppers as well as cooked crab. He drinks red wine, rum, and cachaça. Other offerings include cascarilla powder (powdered eggshell) and sugarcane.

The Santeria Experience -Migene Gonzalez-Wippler
Exu, Divine Trickster and Master Magician – Denise Alvarado
Diloggún tales of the natural world – Santería stories – Ócha’ni Lele
Santeria: Correcting the Myths and Uncovering the Realities of a Growing Religion – Mary Ann Clark
The Secrets of Afro-Cuban Divination: How to Cast the Diloggún, the Oracle of the Orishas – Ócha’ni Lele
Eshu-Ellegua Elegbarra: Santeria and the Orisha of the Crossroads – Raul Cañizares
Obí, Oracle of Cuban Santería – Ócha’ni Lele
Osogbo: Speaking to the Spirits of Misfortune – Ócha’ni Lele
Santeria: The Beliefs and Rituals of a Growing Religion in America – Miguel A. De La Torre
Mysteries and Secrets of Voodoo, Santeria and Obeah – Lionel and Patricia Fanthorpe