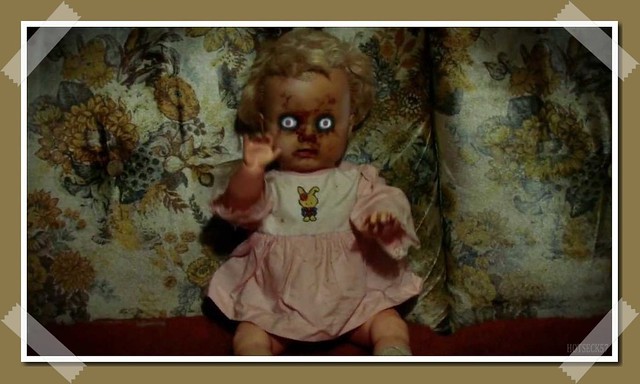 Possessed possessions are objects that seem to have spirit attachments that create problems for the owners of the objects. Possessed possessions can be any object: clothing, jewelry, furniture, household goods, machines, artwork, religious items, photographs, stones, other natural objects, and so forth. The term “possessed possessions” was coined by Ed Okonowicz, who used it in the titles of two books on the subject.

The ability of spirits to inhabit objects is known universally in magical systems. Objects can be cursed. Fetishes and Poppets can be endowed with presences in magical ritual. Spirits can be housed, contained, or even imprisoned in objects; the accidental release of troublesome or evil spirits is a theme in folklore and mythology. Objects also take on the essence of their owners, according to Psychometry.

Psychically sensitive persons can touch or hold objects and receive psychic impressions about owners or previous owners. If the owner of an object dies unhappily, violently, or suddenly, an attachment may occur to a favourite object. Objects may not be “active” until they come into the right place. For example, an object may lie dormant in a secondhand or antique shop, but become energized when placed in a new environment.

The energies of place or the unique field of consciousness of people within the household may be factors in whether or not a spirit attachment becomes active. Paranormal investigators are sometimes consulted by people who have obtained items, usually secondhand, that become problematic. Dolls seem to be particularly susceptible to spirit attachments.

Once brought into the home, Poltergeist disturbances erupt or occupants begin having experiences with Apparitions, Shadow People, Demons, and nightmares. People may also experience runs of bad luck, such as accidents, misfortunes, illness, and so on. The start of the trouble is traced to the acquisition of the object. Remedies include spiritual cleansing of the object and premises, Exorcism, or removal or destruction of the object.

Usually the paranormal problems stop after remedial measures are taken. John Zaffis, a leading expert on Demonology, has collected hundreds of depossessed, or cleansed, possessions from Haunting and Possession cases he has investigated over the course of more than 30 years. His uncle, Ed Warren, and wife, Lorraine Warren, also collected numerous possessed possessions in their investigations.

Zaffis houses his objects in a personal museum in his house, where they cause no problems. In one of Zaffis’s cases, a couple acquired a doll in a tag sale. It had a burnt face. Shortly after bringing it home, the wife experienced mysterious, bloody scratches on her legs. The marks happened while she slept and when the doll was in the bedroom.

After consulting Zaffis, they learned that the doll may have belonged to a girl who died of burns suffered in a fire. When the couple removed the doll from the house, the attacks on the wife stopped. Not all possessed possessions are secondhand, though previous ownership accounts for most cases. One case described by Okonowicz involved a brand-new bedroom set made of wood. The furniture was installed in the bedroom of a 15-year-old girl.

The mother put the headboard in the hallway. One night, both mother and daughter saw the apparition of a teen-aged boy, first in the daughter’s room and then floating out in the hallway. They got rid of the headboard. The identity of the boy was never known, nor was the reason known why a new piece of furniture would have a spirit attachment.

Speculation was that perhaps the furniture had been made from a tree involved in unhappiness or death, such as an accident.

Objects can become possessed through a Curse, magical spell, or use in magical rituals. Some objects seem to take on personalities of previous owners. In lore, objects can be used to imprison entities, such as King Solomon did when he imprisoned the Djinn in vessels and rings.

Possessed objects can remain dormant and then become activated if brought into the right environment by the right person. Problems include poltergeist disturbances; apparitions and dark, shadowy figures; Demonic Infestation; nightmares; illness; and so on. Remedies include spiritual cleansing of the object and premises, Exorcism, or removal or destruction of the object.

Usually the paranormal problems stop after remedial measures are taken.

Ed Okonowicz is a Professional storyteller and author of numerous books on Ghosts and Hauntings, especially in the Mid-Atlantic region of the United States. Ed…

John Zaffis (1955– ) is a Paranormal investigator and author. John Zaffis is recognized as one of the leading authorities on Demonic hauntings and Possession.…

Object-Persons – A term that attempts to express in English the indigenous notion that many objects are not inanimate, “mere representations,” or art but rather…

Infestation is the presence of demons in a place, object, or animal. Infestation occurs when demons are able to take up residence and create disturbances.…