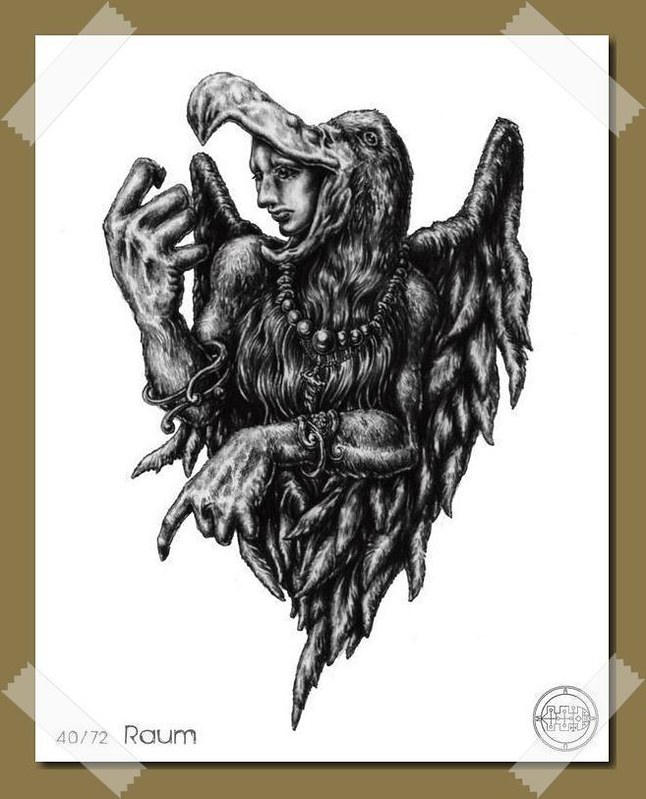 The Demon Raum is a Fallen Angel and 40th of the 72 Spirits of Solomon. Raum is an earl who appears as a crow but will shift to human form when commanded to do so. He steals treasure, even from kings, and carries it anywhere.
He destroys cities and the dignities of men. Raum also discerns the past, present, and future and makes friends and enemies love each other. Before his fall, he was in the angelic order of Thrones. He governs 30 Legions of Demons.

RAUM. – The Fortieth Spirit is Raum. He is a Great Earl; and appeareth at first in the Form of a Crow, but after the Command of the Exorcist he putteth on Human Shape.

His office is to steal Treasures out King’s Houses, and to carry it whither he is commanded, and to destroy Cities and Dignities of Men, and to tell all things, Past and What Is, and what Will Be; and to cause Love between Friends and Foes. He was of the Order of Thrones. He governeth 30 Legions of Spirits; and his Seal is this, which wear thou as aforesaid.

Raum, or Raim is a great earle, he is seene as a crowe, but when he putteth on humane shape, at the commandement of the exorcist, he stealeth woonderfullie out of the kings house, and carrieth it whether he is assigned, he destroieth cities, and hath great despite unto dignities, he knoweth things present, past, and to come, and reconcileth freends and foes, he was of the order of thrones, and governeth thirtie legions.

WANT TO LEARN BLACK MAGICK? CLICK HERE The Demon Uvall is a Fallen Angel and 47th of the 72 Spirits of Solomon. Once a member…

WANT TO LEARN BLACK MAGICK? CLICK HERE The Demon Orobas is a Fallen Angel and 55th of the 72 Spirits of Solomon. Orobas is a…

WANT TO LEARN BLACK MAGICK? CLICK HERE The Demon Botis (Otis) is a Fallen Angel and 17th of the 72 Spirits of Solomon. As a…

WANT TO LEARN BLACK MAGICK? CLICK HERE Barbatos is a Fallen Angel and eighth of the 72 Spirits of Solomon. Formerly a member of the…

WANT TO LEARN BLACK MAGICK? CLICK HERE From “The Goetia: The Lesser Key of Solomon the King” (1904) Written by S.L. MacGregor Mathers ORIAX, or…