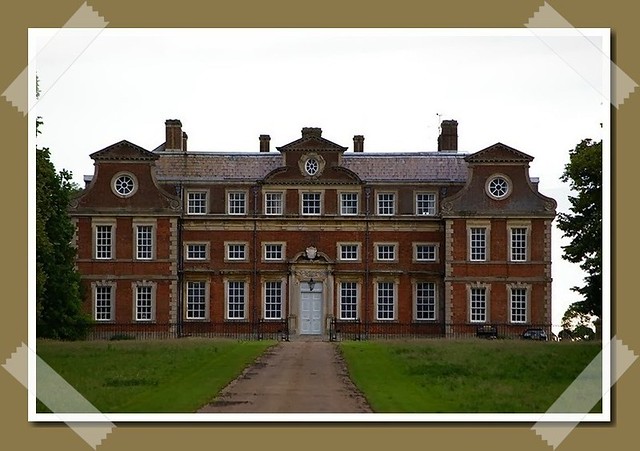 Raynham Hall Stately English manor house haunted for the last 250 years by the “Brown Lady,” who appears on film in one of the most spectacular spirit photographs on record.

Raynham Hall, the seat of the Marquesses of Townshend, is located a few miles southwest of Fakenham in Norfolk. The Townshends became marquesses in 1786, and for generations they lavishly entertained royalty at Raynham Hall.

The identity of the Brown Lady is uncertain; it is believed she is the Ghost of Lady Dorothy Townshend, wife of the second and most famous marquess of Townshend, daughter of Robert Walpole, member of Parliament for Houghton, and sister of Sir Robert Walpole, the first prime minister of England.

At age 26, Dorothy married her childhood love, Lord Charles Townshend, who had suffered the loss of his first wife about a year earlier in 1711. According to legend, Dorothy had been the mistress of Lord Wharton, and when Townshend discovered this after their marriage, he kept her locked in her apartment at the hall. It is not known how she died. Different versions of the legend say it was either of a broken heart, a fall down the staircase, or smallpox.

A portrait identified as Lady Dorothy hung in the hall until it was sold in 1904. The woman is dressed in brown brocade trimmed in yellow with a ruff around the throat. Her eyes are large and shining. It was rumored that the portrait looked normal when seen during the day, but if seen by candlelight the face became evil-looking and skull-like with no eyes.

Numerous stories of encounters with the Brown Lady have been recorded over the centuries. One of the most famous occurred in the early 19th century, when George IV, then regent, visited at the hall and was given the State bedroom. He awoke in the middle of the night to see a woman dressed in brown with dishevelled hair and a face of ashy paleness standing beside the bed. He was so frightened that he vowed he would not stay “another hour in this accursed house.”

The Brown Lady was seen at Christmastime 1835 by Colonel Loftus, one of the many guests staying at the hall. Loftus saw the ghost twice on succeeding nights. The first time, she was standing outside of Lady Townshend’s room. When pursued by Loftus she went down the corridor and vanished. The second night, he encountered her on the staircase; she was carrying a lamp. He described her as a stately lady in rich brocade with a coif (a tightfitting cap) on her hair, but only empty, dark hollows for eyes. Loftus made a sketch of her, which he showed to guests at breakfast the following morning.

Not long after that, Captain Frederick Marryat, a novelist, was invited to the hall. Marryat had a weak theory that the ghost was somehow connected to smugglers and poachers who once had been prevalent in the area. One night, he and two of Lord Charles Townshend’s nephews came face to face with the Brown Lady in a corridor. She held a lighted lamp and grinned at Marryat in what he termed “a diabolical manner.” He was carrying a pistol, which he raised and shot at the ghost point-blank. The ghost disappeared. Marryat later swore the bullet passed right through her. It was found lodged in a door behind where the ghost had stood.

Following that episode, the Brown Lady was not reported again until 1926, when she was encountered by the then Marquis Townshend, who was a boy at the time, and one of his friends.

In 1936 Lady Townshend hired a photographer, Indra Shira, to take photographs of the interior of Raynham Hall. Shira and his assistant, Mr. Provand, were taking flash photographs of the staircase when Shira saw a vaporous form take shape on the stairs. It assumed the form of a woman who appeared to be draped in something white. The ghost began to descend the staircase. Shira excitedly ordered Provand to take a picture. Provand could not see the APPARITION, but he aimed his camera in the direction indicated by Shira. Provand would not believe that Shira had seen a ghost, and he accepted a five-pound bet that the photograph would show the white form. It did—the Brown Lady appeared as an outline wearing something like a wedding gown and veil. The photograph was published in Country Life magazine on December 1, 1936 and caused a sensation. The photograph has been examined by experts, but no evidence of fraud has ever been detected. (See Spirit Photography.)

The Brown Lady also is said to haunt Houghton Hall, the home her brother built on the site of the old family home, occupied by Walpoles for some 600 years. It is said that Lady Townshend spent some of the happiest years of her life at Houghton. According to legend, her ghost appeared to the prince regent while he was sleeping in the State Bedroom. As a result, he transferred to other, albeit humbler, quarters.

Wolterton was built by Horatio Walpole, the brother of the statesman Sir Robert Walpole, in 1727–41. Lady Dorothy Nevill, in Mannington and the Walpoles (1894),…

Gray ladies are the ghosts of women who reportedly died violently for the sake of love or pined away from loss of love. Gray ladies take their name from their frequent appearance as women dressed in gray.

Highlow Hall is a small manor house of probably the sixteenth century, perched on top of a shoulder leading up to Smelting Hill and by…

In Tadworth Court, there hangs a portrait of an unknown lady in seventeenth-century costume; she stands among flowering shrubs and trees, while an area of…

Up to the 1930s, a skeleton used to be kept in an oak chest in this house. Why this should be so is not known;…