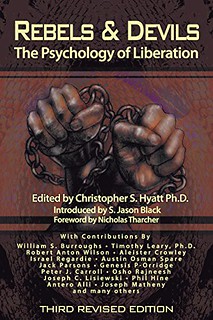 So begins Christopher Hyatt’s “Prologue” to this remarkable book.

This third revised edition of “Rebels & Devils” brings together some of the most talented, controversial and rebellious people of our time. Many, such as Timothy Leary, William S. Burroughs, Robert Anton Wilson, Osho and Aleister Crowley are world-famous. Other contributors, such as S. Jason Black, Joseph Matheny and Peter J. Carroll, though highly accomplished in their own fields, are not as well-known. Still others are lesser-known–for now. But, every contributor, in every article, in every aspect of their lives, has had but one focus: to bring freedom to their world.

In all of human history, the essence of the independent mind has been the need to think and act according to standards from within, not without: To follow one’s own path, not that of the crowd. Inevitably, it follows that anyone with an independent mind must become “one who resists or opposes an authority or established convention”: a rebel.

Usually rebellion is done so quietly that no one notices. But, when others–especially others with power–recognize an individual’s ‘disobedience,’ the rebel becomes the REBEL. And, if enough people come to agree with–and follow–the REBEL, then he becomes a DEVIL.

Until, of course, still more people agree. And then, finally, there is…GREATNESS.

For the first time, a genuine manual of the dreaded “left-hand path.” Braving the new Witchcraft Panic that has swept the world, S. Jason Black…

What are “The Black Books?” They are a series of booklets from Dr. Hyatt and the Extreme Individual Institute. Little can be said about the…

What are “The Black Books”? They are a series of booklets from Dr Hyatt and the Extreme Individual Institute. Little can be said about the…

What are The Black Books? They are a series of booklets from Dr. Hyatt and the Extreme Individual Institute. Little more can be said lest…

In the most of the world, psychopaths have gotten a bad rap. That, of course, is quite understandable since almost all of the world’s religious…