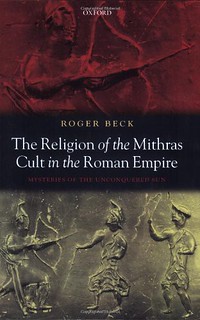 This volume is a study of the religious system of Mithraism, one of the “mystery cults” popular in the Roman Empire contemporary with early Christianity. Roger Beck describes Mithraism from the point of view of the initiate engaging with the religion and its rich symbolic system in thought, word, ritual action, and cult life.

He employs the methods of anthropology of religion and the new cognitive science of religion to explore in detail the semiotics of the Mysteries’ astral symbolism, which has been the principal subject of his many previous publications on the cult.

Mithras (Mithra) In Persian mythology, god of life, heat, fertility, a mediator between the gods and men, and chief aide to the good god, Ahura…

This vintage book comprises three famous Malinowski essays on the subject of religion. Malinowski is one of the most important and influential anthropologists of all…

Gaulish mythology begins as an early Celtic religion, and eventually merges with Roman polytheism into the Gallo-Roman religion. Through years of interaction with surrounding cultures,…

Walsh, Roger N. – Professor of psychiatry and behavior at the University of California at Irvine, whose research interests in transpersonal psychology involve the psychology…