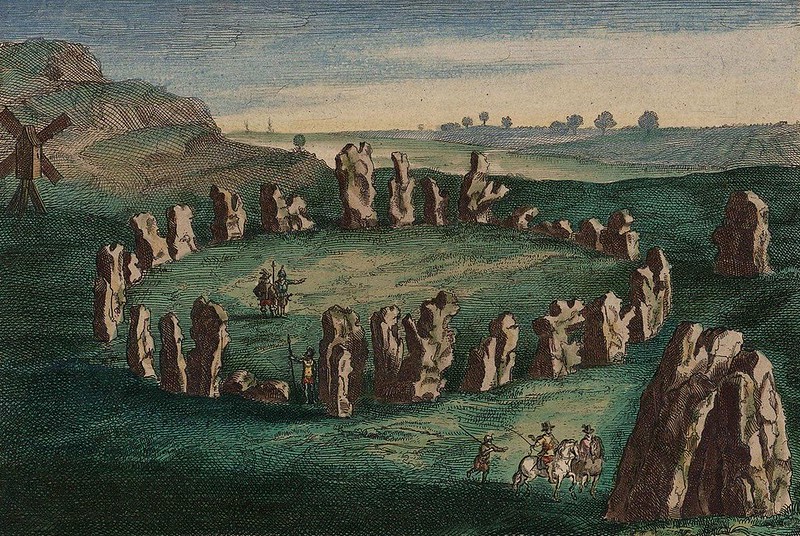 The Rollright Stones are in the Cotswolds in England, a group of prehistoric standing stones associated in popular legend with a witch. The Rollright stones, which are estimated to be older than Stonehenge, are located between Chipping Norton and Long Compton, on a high, windy ridge overlooking Long Compton. The area has a long history of witchcraft activities.

The original purpose of the Rollright Stones is not known, but it may have served as a ritual gathering site.

According to legend, an unnamed Danish king and his army once invaded England. At Rollright, they encountered a witch, and the king sought her supernatural knowledge, asking if he would conquer England. She told him to walk seven strides to the top of the ridge. If he could see the village of Long Compton below, then he would become king of England.

The king eagerly followed her instructions. But at the seventh step, he discovered that the view of the village was blocked by a barrow. At that instant, the witch cried,

Sink down man, and rise up stone! king of England thou shalt be none.

The king and all his men were suddenly turned to stone. The king became the solitary king Stone. Nearby, his soldiers formed a cromlech, or circle, called the king’s men. The witch prepared to turn herself into an elder tree, but before she did, she backtracked to four of the king’s knights, who had lagged behind, whispering and plotting against the king. She turned them to stone, and today they are called the Whispering knights.

Originally, the king’s men numbered 11 stones, but some have been broken into pieces. The cromlech measures about 100 feet across. The stones are believed to date to the Bronze Age; the Whispering knights are most likely part of a burial mound.

Legend has it that at midnight, the stones come alive and turn into men again. They join hands and dance, and anyone unfortunate enough to gaze upon them either goes insane or dies. According to 18th-century lore, village maidens would go to the Whispering knights one by one on midsummer’s Eve and listen carefully, hoping to hear in the whisperings their future and fate.

Until 1949 the Rollright Stones were regularly used as the site of Witches’ gatherings. Sometimes local people liked to sneak up and spy on the Witches. One such person was Charles Walton, who was murdered in 1945 in what appeared to be a ritual killing. In 1949 a Sabbat was observed by two outsiders, and the resulting press publicity forced the Witches to go elsewhere. In 1964 a London Coven held a special gathering at the Rollright Stones for a magazine article. The stones have been vandalized by teenagers, and access to them is now restricted to daylight hours.