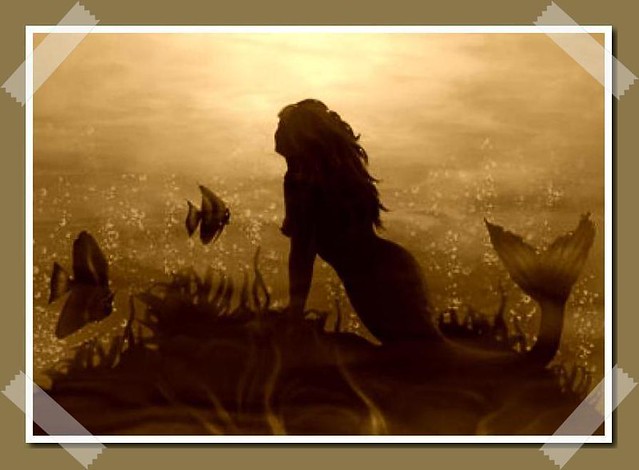 A rusalka is in Russian folklore, the spirit of a maiden who drowns by accident or by force and becomes a Ghost who haunts the spot where she died. Rusalki, as they are called in plural, are also beautiful, gentle river nymphs said to inhabit the small alluvial islands in the rivers of southern Russia, where they secretly help poor, hard-working fishermen.

Although little is known about the rusalki, they are believed to bathe in the lakes and rivers and wring out their long green hair on the green meadows of the water’s edge. They appear mostly at Pentecost when the people sing and dance, and throw their specially woven garlands to the nymphs.

Rusalka are female nature spirits associated with water, fields, forests, and healing wells. Although sometimes dreaded, Rusalka are also petitioned for healing, fertility, and true love. There are fierce debates as to their true identity, nature, and origin. Be careful: the Rusalka are tricksters and shape-shifters with a wicked sense of humor. They may be willing to conform to expectations. In other words, they can be benevolent goddesses or seductive killers as you choose. Here are some theories of their origins:

• Rusalka derives from the same roots as Rus and Russia. They are primal ancestors who annually bless the land with fertility and abundance.

• Rusalka are ghosts, transformed souls of young women who died by drowning, whether as accidents (perhaps lured in by spirits, including other Rusalka), suicide, or murder.

• Christian-oriented explanations suggest that Rusalka are damned souls of girls who died without being baptized, possibly Pagan girls. Rusalka stories were traditionally told to girls and so the added inference is that if they’re not baptized, they’ll end up as Rusalka, too.

Rusalka serve as Baba Yaga’s attendants and guard her rye fields. In the Ukraine, they perch in birch trees like birds, washing, and combing their hair and weaving linen garments, which they wash and hang from branches to dry. They may live in beautiful underwater palaces during winter but move to the trees when the weather turns nice.

Rusalka come down from the trees at night to circle-dance in the moonlight. Allegedly if caught in the act, they drown observers. Water is the Rusalka’s natural element and home but also their weapon: stories describe Rusalka luring people to water, then drowning them, although whether this was always part of their identity or whether this is a Christian attempt to discourage communication with them is unknown.

Rusalka tend to travel in packs: girl gangs of marauding spirits. They are shape-shifters who may appear benevolent and beautiful or scary and fierce. They are described as beautiful, wild-haired, and big-breasted, quite apparent as they’re usually naked when encountered. Sometimes they wear white linen shifts with no belts (in Russian cosmology, belts are a sign of civilization as is braided or bound hair. The Rusalka’s hair is always loose.) Rusalka may appear as incredibly beautiful mermaids or as animated pale, bloated, drowned corpses, essentially zombies of the water.

Rusalka ornament trees with beautiful handiwork as an example of what they expect from women. Traditionally, women weave and embroider special cloths which are draped on birch trees as gifts to the Rusalka and the trees.

Although Rusalka may accept offerings on home altars, offerings are traditionally draped onto tree branches for them, especially birch trees. A temporary altar erected in a forest or beside a source of fresh water is ideal. If you would rather venerate the Rusalka closer to home, an altar in the backyard is generally more effective than one constructed indoors. Incorporate tree imagery into indoor altars and maintain them with a steady supply of clean fresh water in order to encourage the Rusalka to venture within.

Rusalka expect veneration and offerings from women as their due. Rusalka perched in trees call out to girls passing by to give them gifts. Traditional offerings include ribbons, flower garlands, hand-embroidered ritual cloths, and tea towels.