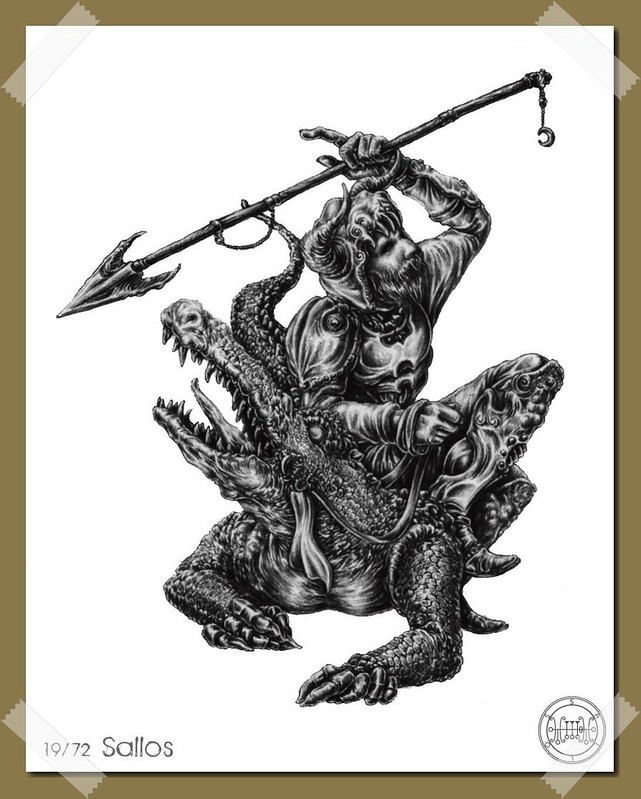 The Demon Sallos ( also Zaebos ) is a Fallen Angel and 19th of the 72 Spirits of Solomon. Sallos is a duke who appears as a gallant soldier wearing a duke’s crown and riding on a crocodile.
He promotes love between men and women and speaks authoritatively about the creation of the world. He governs 30 Legions of Demons.

The Demon is also known as Saleos. About him is written in the Lemegeton :
“he is a great and Mighty Duke; and appeareth in forme of a Gallant Soldier Riding on a Crocadile with Dukes Crowne on his head Peacibly; He causeth the Love of women to men; and men to women; and Governeth 30 Legions of Spirits;”
(Sloane 2731).Mathers reproduced this text for his edition of the Goetia, but the description in Scot is oddly truncated. It reads only”Saleos is a great earle, he appeareth as a gallant soldier, riding on a crocodile, and weareth a dukes crowne, peaceable, etc.”
(Scot, Discoverie of Witchcraft, page 225)

Collin de Plancy has given Sallos a somewhat Teutonic look with his full beard, shortspear and horned helmet. When a Demon appears riding a specific animal, he may be assumed to have some symbolic link with the beast. The crocodile is a southern predator, and is connected with elemental Water. This would lend Sallos a mingled fiery and watery quality, and in the absence of any other indicators to the contrary,would place him in the south.

SALLOS. – The Nineteenth Spirit is Sallos (or Saleos). He is a Great and Mighty Duke, and appeareth in the form of a gallant
Soldier riding on a Crocodile, with a Ducal Crown on his head, but peaceably. He causeth the Love of Women to Men, and of Men to Women; and governeth 30 Legions of Spirits.
His Seal is this, etc.

Saleos [Zaleos] is a great earle, he appeareth as a gallant [handsome] soldier, riding on a crocodile, and weareth a dukes crowne, peaceable, andc.

Zaebos is grand-count of Hell and sweet of character. He appears as a good soldier with a ducal crown on his head and rides a crocodile.