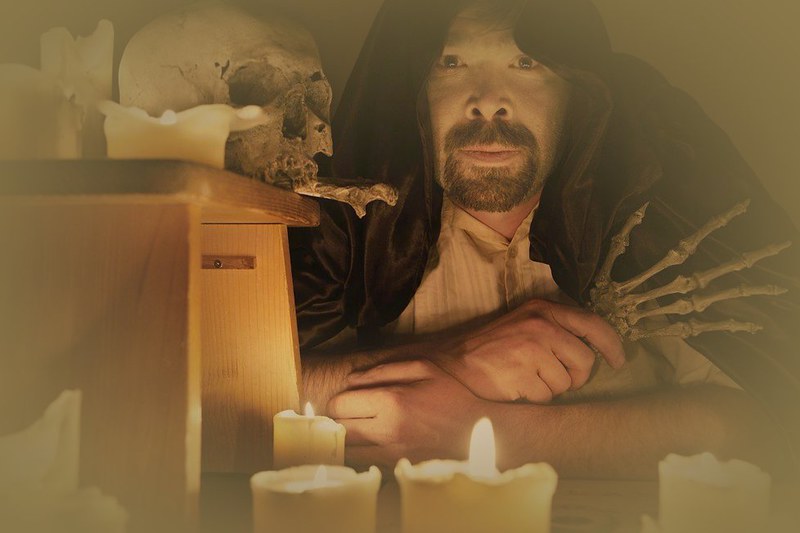 Scrying is the ancient art of clairvoyance achieved by concentrating upon an object—usually one with a shiny surface—until visions appear. The term scrying comes from the English word descry, which means “to make out dimly” or “to reveal.” The services of a scryer typically are sought for predictions of the future, answers to questions, solutions to problems and help in finding lost objects and in identifying or tracking down criminals. In earlier times, a scryer was likely to be a wise woman or wise man—perhaps also called a witch—who was naturally gifted with second sight. Scrying is not limited to crystal balls but includes any smooth and shiny object that makes a good speculum. Many early scryers simply gazed into the still water of a lake or pond at night.

Most scryers use objects with reflective surfaces, such as mirrors, polished stones or metals and bowls of liquid. Egyptian scryers used ink, blood and other dark liquids. In the 16th century, Nostradamus used bowls of water to see the visions from which he produced his famous prophecies. John Dee, the royal court magician in 16th-century England, used a crystal egg and a piece of obsidian said to have been brought from Mexico by Cortés.

Like many other magicians, Aleister Crowley used a precious gem for scrying. Crowley’s speculum was a topaz set in a wooden cross of six squares, painted vermilion. Few witches throughout history have used crystal balls, which are heavy and expensive. Glass-ball fishing floats are commonly used, as are witch balls, colored glass balls intended to be hung in homes to keep out witches and the Evil Eye. A favoured speculum is the magic mirror with a concave side painted black. Witches may make magic mirrors themselves, painting and decorating them with magic sigils during the waxing of the Moon and consecrating them in rituals like other working tools (see witches’ tools). Gerald B. Gardner practiced scrying with a mirror in an old picture frame he found in a London junk shop.

The glass was slightly curved and had been coated gray-black on the concave side. Another scrying tool used by witches is a cauldron painted black on the inside. The witch fills the cauldron with water and drops in a silver coin to represent the Moon in the night sky. Scrying may be done within a magic circle. The best results are obtained at night, when the reception of psychic impressions is believed to be clearer. Methods vary, but after a period of concentration upon the speculum, the scryer either sees visions upon its surface or receives mental images and impressions. Sometimes the visions are symbolic and must be interpreted. Practice is necessary to learn the meanings behind the symbols seen.

The Encyclopedia of Witches, Witchcraft, and Wicca By Rosemary Ellen Guiley

A crystal ball is one of the best-known magical Tools for Divination. The use of a crystal ball for Scrying, the seeing of the future,…

Scrying (also called crystal gazing, crystal seeing, seeing, or peeping) is the ancient act of divination for the purpose of clairvoyance. It is usually achieved…

One of the most ancient forms of Divination is crystallomancy or catoptromancy, performed with a magic mirror. The magi of Persia are said to have…

Madame Lalinn is the Kreyol moon goddess: she is the moon herself, the woman in the moon and the spirit essence of the moon. She…