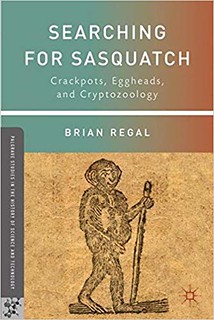 How does science treat evidence from the edges? This fresh and entertaining look at the search for Sasquatch concerns more than just the startling and controversial nature of monsters and monster hunting in the late twentieth century, but the more important relationship between the professional scientists and amateur naturalists who hunt them—and their place in the history of science. The traditional heroic narrative of monster-hunting situates mainstream, academic scientists (the eggheads) as villains rejecting the existence of anomalous primates and cryptozoology as unworthy of study.

It gives a privileged place to passionate amateur naturalists (the crackpots) who soldier on against great odds, and the obstinacy of the mainstream to bring knowledge of these creatures to light. Brian Regal shows this model to be inaccurate: many professional scientists eagerly sought anomalous primates, examining their traces and working out evolutionary paradigms to explain them. Even though scientific thinking held that anomalous primates—Bigfoot, Sasquatch, Yeti—did not and could not exist, these scientists risked their careers because they believed these creature to be a genuine biological reality.

Patrick Huyghe is a science writer whose articles on cryptozoology have reached a large public through their appearance in a number of mainstream magazines. His…

The mountain gorilla is another large animal that has become known to Western science only during the last century. Today, we know there are two…

CLARK, RAMONA (1932 – 1997) Ramona Clark was one of the earliest investigators of accounts in the southern U.S. of unknown hairy anthropoids called the…