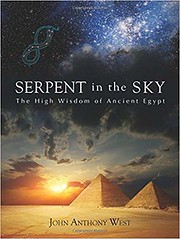 John Anthony West’s revolutionary reinterpretation of the civilization of Egypt challenges all that has been accepted as dogma concerning Ancient Egypt.

In this pioneering study West documents that: Hieroglyphs carry hermetic messages that convey the subtler realities of the Sacred Science of the Pharaohs. Egyptian science, medicine, mathematics, and astronomy were more sophisticated than most modern Egyptologists acknowledge. Egyptian knowledge of the universe was a legacy from a highly sophisticated civilization that flourished thousands of years ago. The great Sphinx represents geological proof that such a civilization existed.

This revised edition includes a new introduction linking Egyptian spiritual science with the perennial wisdom tradition and an appendix updating West’s work in redating the Sphinx. Illustrated with over 140 photographs and line drawings.

The Rosetta Stone is one of the world’s great wonders, attracting awed pilgrims by the tens of thousands each year. This book tells the Stone’s…

Harmachis (Horus who is on the horizon) In Egyptian mythology, the Greek form of the Egyptian god Rehoarakhty. According to legend, the Pharaoh Tuthmosis IV,…

The Egyptians were famous in the ancient world for their knowledge of magic. Religion, medicine, technology, and what we would call magic coexisted without apparent…

The author shows how she, her coven, and her friends, have come to know the deities of ancient Egypt, and how these Gods and Goddesses…

Former Keeper of Egyptian and Assyrian Antiquities in the British Museum, E. A. Wallis Budge (1857-1934) was one of the great Egyptologists of the century…