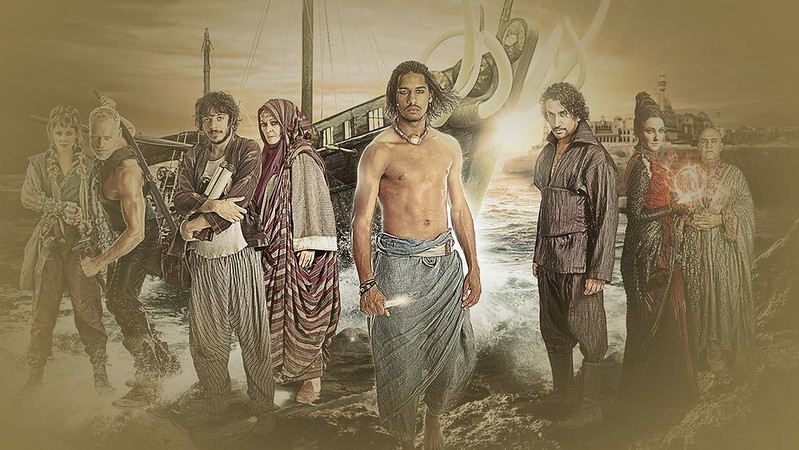 First Voyage (nights 538–541): Sinbad, a wealthy youth, squanders all of his money and, attempting to recoup his loss, buys some merchandise and sails away. The ship stops in the Indian Ocean, and he and others of the ship visit what they think is an island but which is actually a large sleeping whale. They light a fire on the whale’s back, and the heat wakes the monster, which instantly dives into the ocean. Sinbad is rescued by some merchants and returns home.

Second Voyage (nights 543–546): Bored with life on land, Sinbad takes another journey by ship. He falls asleep on an island where the ship has stopped for water, and he is left behind. He discovers the egg of a roc (a fabulous bird) about 50 feet in diameter. When the monstrous roc appears, Sinbad grabs hold of one of its feet and is flown away to the Valley of Diamonds. Here merchants on the cliffs above, unable to reach the valley, throw down meat to the birds in the valley. The diamonds strewn on the valley’s bottom stick to the meat, which the birds carry up and deposit in their cliffside nests. The men then come and steal the diamonds. Sinbad attaches himself to a piece of meat and is lifted to an eagle’s nest. Later he is rescued by the jewel collectors and returns home to Baghdad a rich man.

Third Voyage (nights 546–550): Sinbad’s ship is captured by some savage dwarfs and is taken to an island where a giant one-eyed ogre (similar to the Cyclops of Greek mythology) begins eating the crew one by one. Sinbad heats two iron spits and rams them into the monster’s eye. The ogre summons two other monsters, and most of the men are killed. But Sinbad and two others escape, only to be lured to an island
by a serpent that attempts to swallow Sinbad. He builds a wooden enclosure around himself that makes it impossible for the serpent to reach him. Sinbad is saved by a ship that sails from island to island, and while on it Sinbad sees a fish like a cow, fish like asses, and a bird born from a seashell.

Fourth Voyage (nights 550–555): Sinbad is shipwrecked and cast ashore with his companions on an island inhabited by cannibals, who imprison and fatten them for better eating, though Sinbad eats little so as to remain thin. He eventually escapes and reaches a kingdom where bridles and stirrups are unknown. Sinbad makes himself rich by “inventing” them, and the king gives his daughter as wife to Sinbad. When she dies, he is buried alive with her body according to the custom of the land. Sinbad escapes, however, and returns to Baghdad, rich from rifling the bodies of the dead on his way out of the catacombs.

Fifth Voyage (nights 556–559): Sinbad’s ship is destroyed by two rocs whose offspring has been eaten by merchants. Seizing a floating piece of wreckage, Sinbad is washed ashore on a beautiful island. He comes upon an old man who appears “weak and infirm” sitting on the bank of a stream. Thinking to help the old man, Sinbad carries him on his back, but the man “clasped his legs nimbly” around Sinbad’s neck, making it difficult to walk. Eventually Sinbad makes a liquor to get the old man drunk and then dashes “his head to pieces.” After being rescued, Sinbad learns the man was the Old Man of the Sea, and Sinbad is “the first who ever escaped strangling by his malicious tricks.”

Sixth Voyage (nights 560–562): Sinbad’s ship is driven ashore and breaks up on a barren island. Here he finds many precious stones and also an underground river, on which he rides a raft to the city of Serendib, where the king welcomes Sinbad. He is sent home with great wealth plus a present for Caliph Harun al-Rashid.

Seventh Voyage (nights 563–566): Caliph Harun al-Rashid sends Sinbad back to Serendib with gifts for the king. On his way, Sinbad is captured by pirates and sold as a slave to a merchant who makes him an elephant hunter. He is so successful that he learns of the burial ground of the elephants, where a huge store of ivory is located. He is rewarded with his freedom and given a stock of ivory, with which he returns home.

The romantic adventures of Sinbad appeal to writers of adventure fiction, particularly children’s stories, and Hollywood has produced films of many versions of the legends.