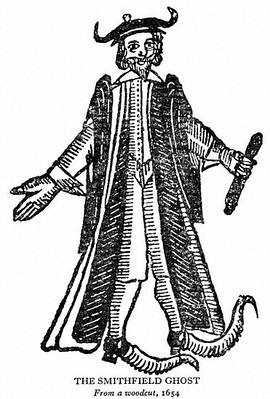 The Smithfield Market Ghost was a Ghost that allegedly haunted the Smithfield meat market in London in the middle of the seventeenth century. In 1654 a pamphlet called “A True Relation of the Smithfield Ghost”, complete with an illustration, described the ghost as dressed in the gown of a lawyer, with horns on his head, long pointed shoes and a meat cleaver in his hand.

The spirit apparently appeared every Saturday night between nine and ten o’clock and pulled joints of meat from the stalls of butchers. Some of the butchers attempted to drive the ghost away but, according to the pamphlet, ‘they cannot feel anything but aire’.

The description of the ghost wearing a lawyer’s gown led to rumours that this was the ghost of a lawyer named Mallet who had died just before the hauntings began from eating poisoned meat. Mallet was said to be unsure who had sold him the meat, because after Smithfield he moved on to terrorize the butchers at Whitechapel and Eastcheape. The ghost eventually disappeared and the mystery remains as to whether it was a genuine haunting or a clever prank.

TASH is an Irish word for a ghost that can appear in human or animal form. Ireland has a strong ghost story tradition and gave…

This small village midway between Northampton and Kettering was the scene of a Nine Days’ Wonder. In 1675, Justinian Isham wrote from Christ Church, Oxford,…

T. F. Thiselton-Dyer, a late Victorian writer on the supernatural, drew attention to the fact that the journal Ackerman’s Repository in November 1820 carried an…

Be afraid. This unusual collection of true ghost stories and hauntings has been put together by Simon B. Murik, who is the son of a…

The Theatre Royal, Drury Lane, is the oldest theatre site in London (save the rebuilt Globe), the original theatre having been built in 1663. It…